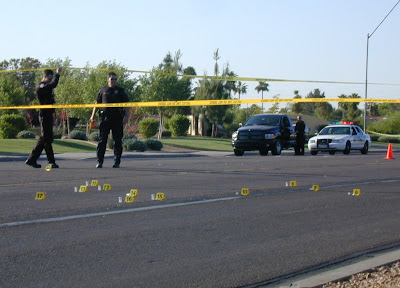 Police say Moore heard his car alarm go off, investigated and saw damage from a break in attempt as the suspect who is now a, “victim”, Jason Rhymes-Taylor, 29, walking away from the home near Union Hills and 31st Drive.

Police said the victim fled to a getaway pickup truck containing two passengers and a vehicle chase began as Moore jumped into his own car. After approximately a one mile chase, Moore allegedly opened fire on Rhymes-Taylor.

Both Moore and Rhymes-Taylor went to their homes. Family members took Rhymes-Taylor to the hospital and a police investigation was undertaken.

Rhymes-Taylor suffered two minor gunshot wounds, was treated and released from the hospital.

Police quickly ruled out self-defense because they are convinced that Rhymes-Taylor was unarmed and merely fleeing from Moore.

I’m waiting to hear the other side of this story since Rhymes-Taylor went home he certainly had time to discard any weapons he may have used or possessed.

Chasing auto thieves is perfectly legal although generally a terrible idea as is shooting car-to-car on city streets.

Arizona has really draconian penalties for these kinds of cases and so far Moore faces more than 30 years in prison.

As for the suspected auto thief, he got a free ride and won’t face any charges.

A jury will decide whether excessive force was used by Moore unless he accepts a plea agreement. Maricopa County prosecutors will never accept any plea deals with less than five years behind bars in such a case.

Even if Moore is later cleared his life will be forever changed.

Why wouldn't the so called victim call the police. Because he was a guilty scummbag, bet if they served a sarch warrant on the thiefs house they would find several real victims propery in it

I'd like to sit on this jury (and live in Phoenix so there's a definite possibility).
From what I've read, there's enough doubt concerning *everyone* involved that the attorneys are gonna have a hard time convincing anyone of anything except that shots were fired.
For example, I'd like to know if/when Moore contacted the Police? The only thing in the news article -- and the Arizona Repulsive, oops, pardon, the Arizona Republic often demonstrates significant bias -- is that the Police contacted Moore, not vice versa.
Was that the first contact over this incident between Moore and the Police?
Inquiring minds, and potential jurors, want to know!