Sheriff Joe Run Out Of Arizona Town Before Sundown--Not Quite. 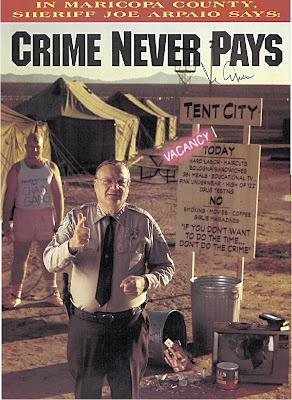 Just a little Southeast of Phoenix Is the Town of Guadalupe. The town has a population of poor and ignorant Hispanic and Yaqui Native American Indians. Since America’s Drug War began there has always been an over abundant population of Illegal Aliens here along with a high crime rate.

Guadalupe has a local government with a history of corruption. They had their own police department run by criminals and the local magistrate could and would fix anything.

After a law enforcement crises in the 1980s they disbanded what was left of their police force and contracted for law enforcement services with the Maricopa County Sheriff.

Recently, Sheriff Joe Arpaio known for being America’s Toughest Sheriff has been attacked by town politicians, clergy and citizens for enforcing the law of the land. The town’s politicians want to select what laws will or won’t be enforced.

I have my own issues with the sheriff about the treatment of prisoners in his jails who have yet to be convicted of anything. That’s the people accused of crimes who are unable to post bail and be released during the one to three years it takes to get their day in court. Often the lies of supposed victims and witnesses are exposed at trials and the former suspects are set free. Sheriff Joe punishes everyone in his jails.

The other issue I have is Arpaio’s publicity stunts are often over the top. Examples are the pink underwear, prison stripes and chain gangs. Again being tough on innocents accused along with convicted criminals is wrong.

The latest rhubarb is over Immigration Law violations. Guadalupe’s politicians think Arizona is part of Mexico. Of course they demand welfare, education and medical benefits meant for American citizens and lawful aliens.

Guadalupe wants Sheriff Joe to turn his head and wink at the violations while taxpayers are soaked paying for medical care, schools, food and imprisonment of dangerous felons who sneaked across our borders.

Sheriff Joe has given the town 180 days to find alternative police services to their liking.

I’m firmly with Sheriff Joe on this one. Guadalupe deserves what they get.

The following is a press release from the Maricopa County Sheriff's Office:

The Office has provided the community with proactive crime suppression enforcing all laws of the State of Arizona on a quarterly basis. These additional enforcement activities have been successful in reinforcing the safety of the community. Our recent activity resulted in 45 individuals arrested and booked. Of the 45 arrests, 18 individuals were warrant arrests (a total of 28 warrants were cleared); 6 individuals were arrested for drug violation; 9 individuals, after being interviewed, were determined to be illegal immigrants; 12 individuals were arrested for miscellaneous other charges. In addition, 22 misdemeanor citations and 120 traffic citations were issued.

This letter will serve as the 180 day written notice. This should give the Town sufficient time to study and research the law enforcement needs of the community and explore other law enforcement alternatives.

We need him here. It would get rid of the gang problem and make people think twice about committing crimes. If politicians are complaining, it's because they need and want the illegal alien - Hispanic vote in that area.

It appears to many of us conservatives in Phoenix that Arpaio is much more interested in making himself more famous and rich than he is in minimizing crime. A lawyer from a conservative action group here reported that there are something like 70,000 felony warrants the sheriff has not served, but he does find time to bust Mexicans for broken tail lights. He's got money to send his staff to Honduras on boondoggles, but not enough to fight crime here. While the crime rate has dropped in the county Arpaio works, the crime rates in every other Arizona county has dropped significantly more.

Actually he doesn't have the money -- he's spent far more than the generous budget from the county has provided, and lawsuits by abused prisoners -- and the families of the ones who died in his custody -- have cost us citizens tens of millions.

So while those emails praising him circle the globe, those of us here who pay attention know it's Arizona that suffers.

Guadalupe has told Arpaio to back off focusing on broken tail lights, and he says he won't do "selective" enforcement. But the reality is that's pretty much what he's been doing, because he's not been real active in patrolling and protecting the community from felons.

Of course Paul is right that Guadalupe has been corrupt. But they'll be a lot better off with Phoenix cops taking over and providing real law enforcement.