The Heat Of The Moment, A Flashback 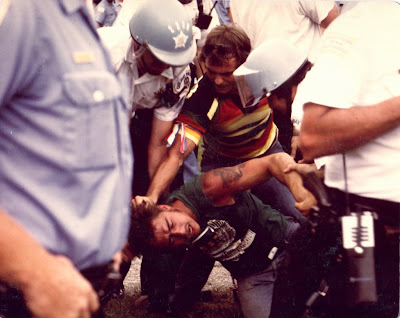 I took this photo in Chicago’s Marquette Park in 1978 at a Nazi rally that later found itself written into the script for the movie, The Blues Brothers.

Here some fellow Chicago police officers are helping this lad to his feet after he stumbled. I heard a rumor that the boy later was elected as a Democrat to Congress. Does anyone recognize him?
Posted by Paul Huebl Crimefile News at 4/09/2008 01:27:00 PM

If you want to ride through Marquette area now, get a tank or bullet proof glass on your vehicle.

Marquette used to be ok. We'd hang out in the park in high school but mainly would escape out of the lousy burbs and hang w/the chicago crowd. GREAT parties & people. Much bette then the stuck up burb crowd.

Great looking Ban-Lon. It matches my old Orange shag carpet in the living room>
The "color of the day" RE WHITE & Blue arm band?

Give us a hint

are you going to tell us who this is?

Well boys and girls I posed this as a question I’d hope some reader may help me with an answer.

I judged this fellow’s political aspirations by his behavior. Since he threw a beer bottle at some coppers I figured he’d end up as an important Democrat…