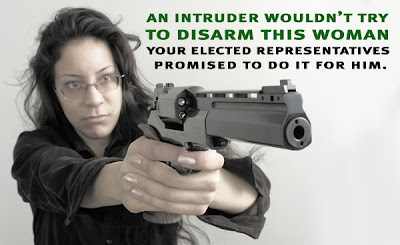 Gun rights hating members of city councils, county boards, state legislatures and Congress are working harder than ever. They seem to be pushing forth every kind of scheme to separate law-abiding Americans from the means to defend themselves and their country.

I predict that most gun laws will begin falling in America after the Supreme Court rules one Monday morning within the next couple of months.

I’m no lawyer but I just can’t envision a ruling that says keeping and bearing arms is an individual right and then allowing any government infringement on the right.
Many Americans think that licensing guns and owners like automobiles and drivers are somehow constitutional. The cases involving Poll Taxes and Literacy Tests for voters settled that kind of requirement long ago.

Firearm registration will survive despite two previous Supreme Court Ruling barring prosecution of convicted felons for their failure to register on Fifth Amendment grounds. If you can’t require felons to register their guns, what’s the point of registration?

I anticipate no changes in the prohibition of felons from possessing firearms because the felons lose rights as part of their punishment for crimes.

The gun laws won’t just fall on their own in most cases as that will happen as prosecutions are challenged in criminal courts. There will also be challenges in civil courts as citizens ask that standing gun rights infringements be struck down. This time the gun-rights defenders will have the courts on their side.

I further expect to see more cowardly criminals lose the protection that gun laws have provided them. Crime will decrease as the good guys exercise the rights wrongfully taken from them.

As for the hand-wringing pacifists and gun-rights haters, they will be mounting a campaign to abolish the Second Amendment though the normal process or ask for a Constitutional Convention. Then there’s always the United Nations.
Posted by Paul Huebl Crimefile News at 4/14/2008 02:52:00 PM

I just hope you're right on this. The gun grabbers have been picking at 2nd amendment rights for years....it would seem only fair to pick everything back.

When New York's Sullivan Act was first passed, a gun owner needed to get a license. At that time it was a simple task and not intrusive. 100 years of tweaking have resulted in the draconian law New York has now.

With the Supreme Court about to rule correctly, you're right about how local jurisdictions will attempt to pick apart our rights. I just hope the high court starts taking more cases and puts these people in their place.