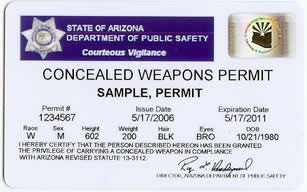 I wrote many legislative bills for Arizona’s gun owners that were designed to and did eventually legalize the carrying of concealed weapons. For me it was a 14 year battle I did side by side with Prescott’s own Representative, Dave Carson. This was Carson’s sweetest victory in his legislative career. Carson lived to get his own permit but soon passed away. I consider Dave Carson the Father of Arizona’s Right to Carry Law.

With me were two heroes, Landis Aden and often Sandy Froman would drive up from Tucson to lend her eloquence, grace and beauty to our fight. Later Froman was our NRA President for two terms. Perennially working all 90 members of the Arizona Legislature for gun rights was quite a quest during those years.

When the final bill was halfway through the process I noticed that it lacked any privacy considerations. If the bill passed in its current form, robbers and killers could quickly learn if their prey had a concealed weapon permit. News media could learn the personal information and addresses and publish whatever they wanted from the public record. I quickly met with Dave Carson providing him with language to correct the problem. The rest is history and CCW permit holders are protected.

Over the years reporters have written and filed stories about prominent or celebrity types revealing that they had carry permits. I guess it was an effort to embarrass or endanger them. That won’t happen in Arizona.
Posted by Paul Huebl Crimefile News at 4/25/2008 01:19:00 PM

Thank you. I appreciate that very much. I'm glad to know what's happened in other states won't happen here.

Thank you for protecting my privacy. (Er, did I just give away my "secret"? Darn.)