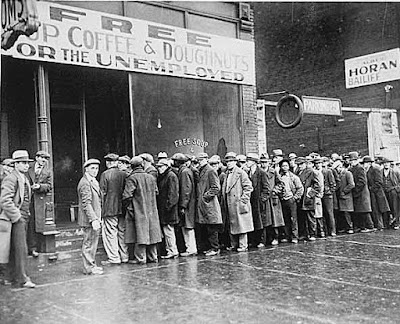 There were a few times in our history when Americans went hungry. The Great Depression and food was rationed during World War Two. We’ve been able to keep food inexpensive and plentiful for all through longstanding pricing schemes.

Now there are lots nasty rumors that our food supply may be interrupted. We may find ourselves in monetary crises as our printed money backed by nothing becomes worthless. We can definitely count on some serious inflation brought on by runaway fuel prices.

The only fix our government seems to know is to print more money while they tax productivity to death. Most businesses just can’t survive any more taxes and regulation. Unemployment can be the only result.

In the past Americans have proven themselves resilient to these kinds of problems but I think the Me Generation will not be able to cope.

I just don’t expect to see our urban freeloading populations quietly shedding pounds without uncontrollable violence. We maintain an entire underclass with handouts and they are too spoiled to submit to any deprivation.

Our banks are in serious trouble and the FDIC $100,000.00 per account insurance is too insufficient to protect American assets in the endangered financial institutions. America’s wealth is in danger of redistribution.

Any such crisis will bring out our Communists like flies on a manure pile. They will convince far too many folks in our ignorant population to join the Karl Marx train straight to Hell.

Urban Americans will be the ones that suffer the most. People in rural areas will hunt, fish and grow their own food. Perhaps the rural Americans will be on the receiving end of the wealth redistribution for a change as food becomes the new currency. How will the new conflicts shake out?
Posted by Paul Huebl Crimefile News at 4/21/2008 08:07:00 AM

They are going to use food as a weapon to control us. They already have mass concentation camps setup to house the dissenters too. This country is going to hell and quick brother.

Paul: Gullible is a word I think you should look up in the dictionary, just after you research the Law of Supply & Demand.

Before geniune food rationing hits, everyone will have to kill their pets. Earl Butz said it best years ago.

They did not eat all the pets during WWII when they had rationing! I’m not sure just why they felt the need to ration.

Of course they always seemed to have rationing in the old Soviet Union.

Frank James is they guy’s opinion I’d trust on this subject since that’s one of his areas of special expertise.

Paul: Here's the deal, rationing only occur or work for that matter when the government in any country interfers with the free market.

The Law of Supply & Demand dictates when the availability of an item becomes less, the price goes up. Think gasoline, but are we OUT of gasoline? Of course not, we may have to pay $5.00/gal, but it's still available. Same with food. Rationing only comes into play when the government says you have to sell something for a set price, or this item is so valuable we are going to restrict its availability.

In which case the Black Market becomes an alternative market. Think rubber tires during WWII.

The Laws and Rules of Economics are everybit as real as those of any other science.

However, if I'm a merchandiser and I'm sitting on several tons of rice or some foodstuff that's not selling real well, nothing beats convincing a braindead MSM reporter that it is so rare it has to be 'rationed'.