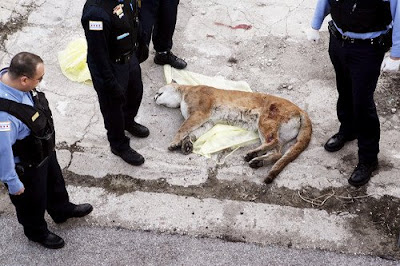 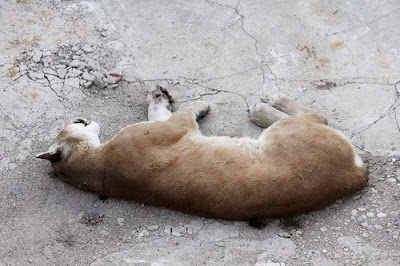 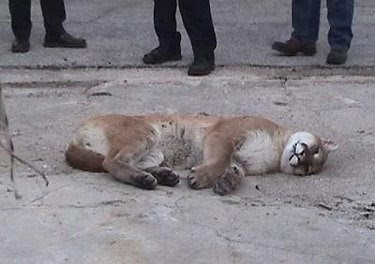 I held off dealing with this story as long as I could. Chicago police officers from the 19th district shot and killed a 150 pound for real mountain lion in Roscoe Village near Lane Tech High School.

I’m an animal lover from way back and think God’s four legged creatures are a lot more tolerable than most of the two-legged animals inhabiting the Windy City right now especially those in City Hall.

Here the police ran out of options to control a dangerous predator and resorted to gunfire. You’d think the cops murdered a beautiful young high school cheerleader listening to the hordes of critics and cop haters.

I learned a lot of useful things in the old O’Brien Street police academy but I’m sure I must have slept through that class on lion hunting or lion control.

You can’t escape the fact that mountain lions always move at lightning speed and are a serious threat if they are cornered or hungry. The same critics would be whining if the cat killed a child or senior citizen.

Today local politicians, media and a large percentage of residents of Chicago hate cops. The us vs. them mentality has never been worse in the city with “much smaller shoulders.”

It's more obvious everyday that Chicago cops have lost their desire to do more than survive and collect a paycheck. The awful appearance of today’s Chicago cop reflects the lowest possible morale.

I don’t see a fix for what ails my hometown. Perhaps bringing in thousands of these mountain lions and letting them roam free may be the ultimate solution.

It makes me sad to see the end of such a beautiful animal and sorry for the cops who had the duty to put it down for the safety of the city's inhabitants....

Was this cat a "honor student" in his obedience class ?

Do you have a thing for cops? Send your tale, along with your relationship questions and problems to cheryllavin@aol.com or Cheryl Lavin, 435 N. Michigan Ave, Chicago, IL 60611. Please include day and evening phone numbers. Letters may be used in whole or in part and become the property of the column.

You have no idea how bad the CPD is right now,coppers are getting fired and indicted by the busload for nonsense allegations that in the past would never and could never hold water. This all started about three yearsa go under the Fat Phil Cline"Reign of Terror".

It sucks that hte cat had to go but better him than me or you. Did you see the FOX News video of the incident Paul? It is a must see,look it up on youtube. The cougar pranced right behind a tac guy and it shows the boys in blue lighting her up.