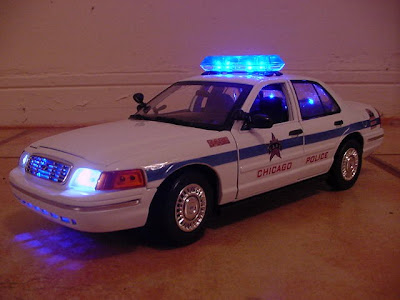 Chicago had a horrific weekend of shooting Mayhem. The body count is difficult to track as more wounded and dead are discovered and the wounded die in hospitals. The offenders are the usual suspects that can now sense Chicago police are happy to let them just shoot it out.

Major morale problems plague the department as the relationship between cops and Mayor Daley has turned really sour. The department is thousands under normal strength and there’s no contract progress.

The cops are angry that Daley has only made war on gun ownership by normally law-biding citizens. The end result is that the criminals are in charge.

Look for normally quiet areas of the city to go unprotected as the department command staff step up high saturation patrols in troubled neighborhoods. Of course the cops maybe just wasting a lot of gasoline as they drive aimlessly around.

I suspect that brutality complaints and police involved shootings will be dropping dramatically as Darwin’s law will thin the population. Cops that avoid work rarely get complaints or find themselves in shootings.

These days, Chicago’s finest have little interest in doing more than protecting themselves and collecting a paycheck. This summer Chicago will not be a safe place to live or work. By law cops can’t go out on strike but they have many creative and effective job actions at their disposal.

The new police superintendent has been given and impossible task, leading a department hated by the politicians running the city.

The Chicago Police Department is close to hitting bottom. I don’t see a way up or out until Alderman Burke, his puppet mayor and city council are forced out of office and perhaps get prosecuted for crimes.
Posted by Paul Huebl Crimefile News at 4/22/2008 10:59:00 PM

You're on a roll this week Paul. Are you going to call into WGN Thursday?

They had FIVE killed this afternoon on the south side ! What do you think of that Mr mayor .

Paul, you really got it right on this one! I may have to print this for the sheeple who just don't get it.

CPD has to ditch the residency requirement,pay more and sooner,better bennies,better equipment,training and then they can start to hire quality people.Also fire all the folks who do not belong there in the first place.

Nobody want the job,the word is out,not worth it for todays officer.

i used a half a tank of gas tonight wandering aimlessly. we had a delicious salad for lunch though. it was scrumptious.