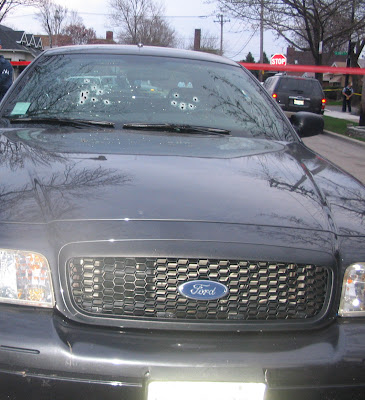 In a prelude to another exciting Chicago summer local criminals were out controlling the population again. The squad car pictured above was the target and thankfully the officers escaped with their lives. Others weren’t so lucky

Chicago like Washington DC has a total prohibition on handguns. Statewide there is every kind of control from a special state purchased ID card before a law-abiding citizen can own or purchase firearms or ammunition. Besides waiting sometimes months for the ID card there are still onerous waiting periods for each purchase and additional background checks. The state ID card closes every, what gun-rights hating politicians call loopholes.

Illinois criminals arrested and charged with violent gun crimes never have the required card. Illinois and Chicago politicians live in a dream world where they believe that guns only come from licensed dealers at gun shows.

The gunrunning networks are simple. Criminals are supplied by burglary proceeds, stolen police and military weapons. Drug dealers often accept payment in guns as well as cash later selling the guns at a profit. Despite the heavy-handed federal, state and local gun law enforcement criminals in Chicago will never be disarmed.

The Chicago Police Department’s management made sure that the city’s murder statistics were under-reported by reclassifying unsolved murders as ongoing death investigations. They willfully concealed the Medical Examiner’s cause of death rulings in an obvious effort to suggest that Daley’s gun control really worked.

Gun control is a failure in every free society in the entire world. Governments can only control citizens that obey the laws and gun prohibitions. Gun control laws do little but help criminals gain total and absolute dominance over the law-abiding citizens.

The most obvious areas of failure were the creation of criminal, free-fire zones also know as Gun Free Zones. Airports, schools and malls will always remain killing Zones until America wakes up.

Those hoods are learning to shoot! Nice grouping!

Those BS rallies and marches are wornout with the citizens,time to face the piper.

RockNRoll Baby,this is what happens when you destroy the CPD!!!

In an unprecedented occurrence the new Chicago Police Superintendent Jody Weis held an emergency impromptu press conference to address the incredible surge of weekend violence in Chicago. 32 people have been shot,two critically stabbed and 6 dead since Friday afternoon. Police spokeseperson Monique Bond attributes the upswing in violence to warm Spring weather. This comes at a very bad time for Mayor Richard M. Daley and the City of Chicago, which is a final contender for the 2016 Olympics. The national media has been keenly focused on the deaths of 22 Chicago Public School students this year and a record 34 Chicago Public School students who were killed during the 2006-07 school year.

What warm weather? It's freezing here.

QUITE EMBARASSING,WHAT TO DO??? Lie to lower the mayhem count???

Unreal,
The City of Chicago is now stating for the record that the mixup with the number of shootings/CONFLICT has to do with different tracking methods.

LMAO,I guess that means the actual number of physical shooting incidents versus the actual number of people shot/victims. This method does not count multiple victims from one incident as more than one shooting. Very slick,way to spin it,someone is being groomed quickly. It is all a matter of perception and smoke and mirrors.

NEVER TELL THE TRUTH THE PUBLIC MUST NEVER KNOW THE TRUTH!!!

The city and the CPD are shot,they are lucky that I go to work anymore. Fuck Chicago!

King Richard still blames the guns, Not the innocent little angels that are pulling the triggers.