Will A Dead “Witness” Haunt Phil Spector At A Second Trial? 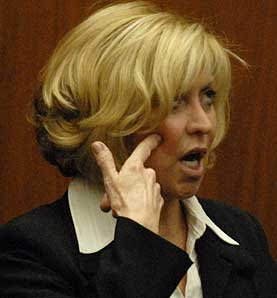 Dianne Ogden-Halder, once dated and worked for Phil Spector. Things went sour and decades later Ogden-Halder vilified Phil Spector in court claiming he twice pulled a gun on her and tried to rape her. There was no follow-up police action, prosecution or corroboration to the alleged events.

Despite credibility issues, a lack of substantiating evidence and the passage of time Ogden-Halder was allowed to testify in the totally unrelated Phil Spector murder trial. That testimony was recorded by a court reporter and video was captured by Court TV. Since Ogden-Halder was cross-examined by Spector’s Defense counsel I believe the next jury will hear and perhaps see Ogden-Halder testify from the grave.

I can’t imagine a more prejudicial event than to feed a second jury the words of the now dead witness. Ogden-Halder will never be able to change her story or undergo additional cross-examination. Any jury would be overly sympathetic and even possibly consider the dead woman as some kind of saint. Our society seems to treat the dead with much more respect than the living.

In Spector’s first trial Judge Larry Fiddler allowed Ogden-Halder to testify. California’s voters recently approved changes to court rules allowing for ancient allegations of a similar nature into criminal trials. I call the changes, unfair, outrageous and nothing more than a helping hand for lazy prosecutors.

In minimal fairness, Ogden-Halder should not have been allowed to testify at the first trial but bringing her into a second trial is beyond ghoulish.

Phil Spector is due to be in court for a pre-trial hearing on March 28, 2008. I expect to see a boat load of new Motions to have been filed in this case by the defense. Among the expected motions is the one already filed seeking to have Judge Fiddler remove himself because of his continual biased behavior against Phil Spector.
Posted by Paul Huebl Crimefile News at 3/12/2008 05:12:00 PM