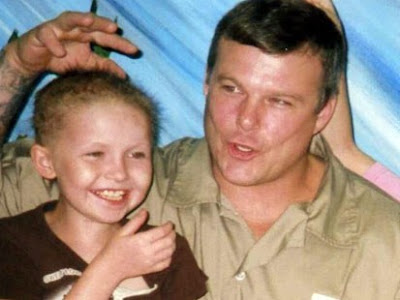 After making nearly 1000 drug arrests as a cop I learned the only folks that benefit from tough drug laws are the people involved with every aspect and side of the business of drug trafficking.

Let’s face it too many Americans are using or are just plain hooked on drugs. I have zero sympathy for anyone with a drug habit they themselves created. Today I say the time is long overdue to end the Drug War and put them all out of business in a single day.

Now we have the tragic and heart breaking case of a convicted drug trafficker who’s 10 year-old daughter, Jayci Yaeger is dying from brain cancer. Her father is serving the last year of a five year federal prison rap. Jason Charles Yaeger can’t get a furlough to see his child fulfilling her last wish on this earth.

This is not about mercy for a drug dealer but mercy for his innocent little girl. The Federal Bureau of Prisons has simply denied the request. The court of last resort is President George W. Bush. I say a Commutation is in order for the most compassionate of reasons, a dying child needs her daddy.

You can let President Bush know how you feel by sending an e-mail here: comments@whitehouse.gov
Put “Please help Jayci” as the subject.
Posted by Paul Huebl Crimefile News at 3/20/2008 04:01:00 PM

bush better release the two border ganets B4 they do him. thye were incarcerated while protectiong our nations borders