A Special Treat For My gun Loving Friends 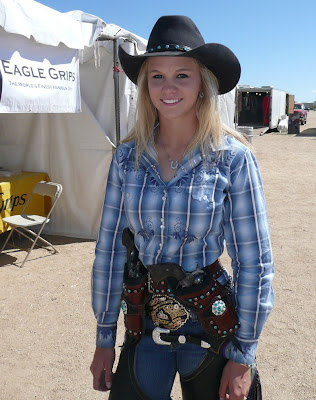 I’ve had a long association with Eagle Grips that began around 1971. In case you don’t know Eagle grips are the most fabulous, high end, after market custom gun grips around. I have the most fun with this company as I travel around the country to attend various shows and exhibitions.

Earlier this month Wild West Mercantile’s, Winter Range was held In Phoenix, Arizona. The Single Action Shooting Society holds cowboy matches at the Ben Avery gun ranges. There are the standard pedestrian shooters, and then there are the specially skilled mounted cowboys and girls that ride fast and hard as they shoot their six-guns from the saddle.

I was amazed to see the World’s Women Champion Mounted Shooter do her thing. She is well beyond her 14 years on this earth. Most of the socks in my dresser drawers are older than Melissa!

Sit back and watch the multi-talented mounted showgirl do her thing! Yes, those are real single action .45 Long Colt, Ruger Revolvers. Melissa Dagroo is one Cool Kid!

Mature and level-headed. She would make a great cop.

sad thing is most cops could not do that.

What an incredible young lady! How much would I like to own stock in Ruger right about now?

Buy Rugr! With this girl promoting them there is no stopping a great gun!