Sara Jane Olson Has Been Returned To Prison! 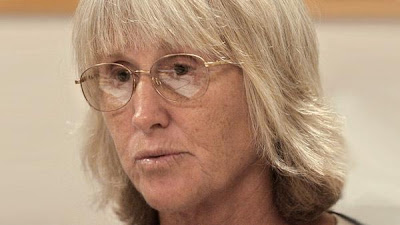 Days after being set free for 35 year-old crimes connected to her and her terror group, The Symbionese Liberation Army, Sara Jane Olson is back in prison.

Olson who was formerly known as Kathleen Soliah, spent decades on the run and started a new life and family quietly in Minnesota. Olson was captured without incident, entered into a plea agreement and served time as a model inmate.

Olson’s release hit a sour note with LA police officers and the family of a woman murdered during an SLA bank stick-up. Olson was connected to an unexploded bomb placed on a police cruiser.

Corrections officials blamed a clerical error that inadvertently reduced Olson’s sentence by a full year. She now won't be eligible for release until March 17, 2009, officials said. I guess the folks on our government's payroll can't do simple math.

I can’t seem figure out how another year will protect us from this 60-Plus year-old woman or do anything more than waste tax money.
Posted by Paul Huebl Crimefile News at 3/22/2008 04:25:00 PM

What a screw up! Who pays for the woman's plane ticket now. What a crappy thing to do to her family that harmed nobody.

I hope there is a way for her to be compensated for this mess perhaps with the remaining year being forgiven by Gov. Termanator.

What a "crappy thing" she did when she tried to kill (and apparently succeeded in doing at least once)people, rob banks, and in general wreck havoc with society. She should have spent the remainder of her miserable pathetic life in prison.

Today Sara Jane Olson has relevance only to her family. She’s an old woman now who threatens nobody. She deserved death long ago but she has turned herself around. There’s no benefit to anyone keeping her housed at taxpayer expense. Let a younger more dangerous career criminal occupy that prison cell.

This is so insane. It is tantamount to the case below. Another clerical error.
http://hi-caliber.blogspot.com/2007/07/inmate-mistakenly-released-from-prison.html

Olson was re-arrested this morning by corrections officers.

What was she charged with? Certainly not escaping from prison. This may be an unlawful arrest under color of authority. Interesting! They couldn't find a better use for $50,000?