In today’s L.A. Times they ran this inflammatory photo with a story about the D.C vs Heller case being argued before the United States Supreme Court. The photograph is a fake! The “illegal handgun” is no more than a toy. 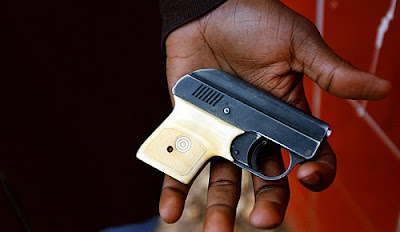 The picture was credited to Jacquelyn Martin / Associated Press. The caption is as follows: “A 14-year old who asked not to be named had this illegal handgun on him in southeast Washington on Tuesday, March 11, 2008. Under a 31-year-old law in the nation's capital, ownership of handguns is barred for nearly everyone except law enforcement. The ban is up for review in the Supreme Court.”

The picture is of a German made RTS tear gas delivery device that uses a small amount of gunpowder to deliver CN powder to an attacker. The gun and several like it were manufactured in the early 1960’s in Germany. These guns were no longer made or sold when aerosol spray cans were found to be far superior tear gas delivery system to these tear gas pistols.

The RTS was never considered a firearm by ATF It was freely imported, unrestricted and sold by mail and available in American novelty shops. Needless to say nobody made or sold the ammunition for this obsolete gun in several decades.

The RTS was far less capable of converting to fire ammunition then a ball point pen.

The l.A. Times biased if favor of the D.C. gun ban? Never! They support repeal of gun laws!

The L.A. Times is showing their true colors again! Red!

The A.P provided the photo, what a screw up!

I sent this link to the Reader's rep of the L.A. Times.

Hmmm...I wonder where the spent casings come out. Perhaps this was a left-handed model. Or a gun that used some of that yet-to-be mass-produced caseless ammo.

The “rounds” for this device are placed in a strip magazine that is inserted just under and parallel to the barrel that has a grate similar to a drain cover. That grate prevents the barrel from expelling all but gas. That’s so powder fragments don’t injure someone’s eyes at close range.

The operation is a heavy double action trigger. As the trigger is pulled the strip magazine moves rearward and begins to project from the upper rear portion above the grip.

They seem to have taken notice.

FOR THE RECORD:
An earlier online version of this article was accompanied by a photo described as showing an illegal handgun held by a 14-year-old in southeast Washington, D.C. The Associated Press is checking on the authenticity of the gun shown.