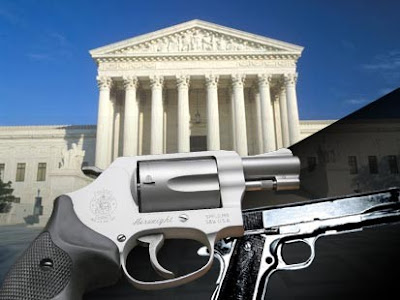 Our Supreme Court has scheduled arguments in the historic case D.C. v. Heller for March 18.

The current Bush Administration recently did a pathetic flip-flop by first supporting the Second Amendment then more recently withdrawing support. They’ve been granted additional time to argue their new position. This is a lot like when former President George H.W. Bush claimed to voters that he’d support no new gun laws then reneged when he soon administratively banned certain firearms from importation.

In any event the case for Heller and gun-rights supporters seems bullet-proof and destined to end gun bans in the handful of Bolshevik states that have continually violated their citizen’s rights to keep and bear arms. The Supreme Court’s decision is due to land in June before the summer recess. Let's hope for the best.
Posted by Paul Huebl Crimefile News at 3/03/2008 05:28:00 AM

The gun grabbers will be crying from the highest mountains when this ruling comes. "oh, but the children!" or some other claptrap like that.

It will be refreshing to see the ruling. Then what will gun grabbers do?