What Happens When There Are Too Many Guns? 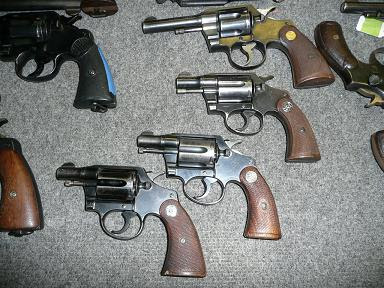 What if 30, 000 or even 60,000 armed ordinary Americans traveled to an American city? Riots, bloodshed, skyrocketing crime may result you say? These events happen at least twice a year when the NRA Convention and the Shooting Hunting Outdoor Trade Show holds their events in various larger cities. Criminal acts by the event attendees have never happened.

Perhaps there would be an increase in gun accidents or other mayhem? To the chagrin of the avowed pacifists, gun-haters and Left Wing political types incidents during these week long events just don’t happen.

On a smaller scale the same could be said about gun shows and America’s gun ranges. Whoever heard of a mugging, rape or murder involving and gathering of gun owners to buy, sell, trade or practice with their firearms? Those kinds of things seem to be reserved for Gun Fee Zones.

The NRA plans to bring at least 30,000 members to the 2008 Annual Meetings & Exhibits in Louisville Kentucky, May 16 - 20, 2008. Kentucky is a Right to Carry State and you can count a high percentage of the visitors to packing heat.

The carjackers, muggers and other violent criminals of Louisville should beware; there are consequences for criminal conduct. I suspect the miscreants will be on their best behavior.
Posted by Paul Huebl Crimefile News at 2/29/2008 10:01:00 AM

Think of how much crime takes place when five million + deer hunters take the field on opening day. And, they're all loaded with "cop killer" bullets.