NIU Gunman Was The Killer Puppet Of Liberal Politicians 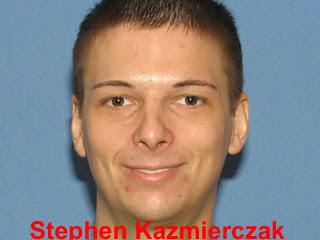 Stephen Kazmierczak, 27 is now identified as yesterday’s NIU gunman was a mentally disturbed man who stopped taking his anti-psychotic medicine. Kazmierczak’s troubles were hidden from public records and even the Illinois State Police who did a required background check enabling him to get a gun owners card.

Of course the victims of the madman were all denied the ability to stop this deranged killer by an outrageous and un-Constitutional Illinois law that forbids meaningful self-defense.

Liberal political thinking and policy was the real killer here. Liberals demand absolute privacy for mental patients even though that endangers public safety. Liberals also push every conceivable kind of gun ban on law-abiding Americans who have an absolute Constitutional right to keep and carry firearms. It was the Liberal politicians that guaranteed this killer an unarmed and vulnerable soft target. The Liberal platform and politics of victimization here was and is nothing but a recipe for disaster.

Ask yourself a serious question about the mall and school massacres. Why have these bloodbaths only occurred after gun control laws and bans were enacted during the 1960s through today?

It’s time for those few holdout states like Illinois to try a new approach that works really well in the majority of the free United States. That of allowing concealed weapons for the law-abiding and the elimination of all Gun Free Zones.
Posted by Paul Huebl Crimefile News at 2/15/2008 09:43:00 AM

Watch how fast guns and ammunition get banned in Cook County and Illinois now.