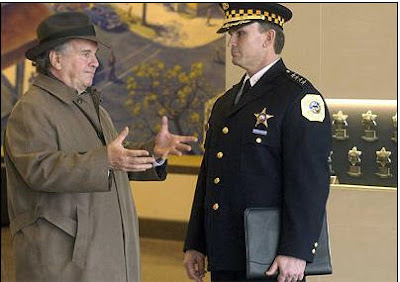 The respectful custom began with a very large man, Orlando W. Wilson, Chicago’s first civilian police superintendant. Before Wilson the title for Chicago’s top cop was Chief like every other police department. Wilson was very different and so was his management. Wilson was a cop long before he became a criminologist and professor. Wilson knew about going to domestic violence calls and closing down rowdy bars at 2:00 AM. Wilson never attended the Chicago Police Academy or patrolled Chicago’s streets. Wilson had enough respect to never wear that uniform and star he did not earn. Wilson always wore a suit.

Former FBI Special Agent Jody Weiss never patrolled any street in America or attended the Chicago Police Academy. Weiss never heard the slightest discouraging word from the lips of an angry traffic violator or Slid Row vagrant, but he quickly dressed himself in a uniform he never earned. I suspect that will be one of many steps that will alienate him from real street cops.

Chicago’s Finest nicknamed their new boss, J-Fed. I suspect that cops in Chicago are in for a very turbulent period until J-Fed at least until he gets his walking papers from the next mayor.

I agree, he should be in a suit. The guy is making over $300K per year, he can afford some great looking tailored suits.

If you look real close at Jody. What do you see ? He looks exactly like the grown up version of the kid that played the banjo in Deliverence . Tell me if I'm wrong.
He will not gain the respect of the rank and file. He is now and always will be a Daley puppet. In closing I must say that he looks like "SHIT" in a CPD uniform.

Jodys is a male? FBI are paper pushers with guns. Hell when a Cop crosses the line, its usually exsessive force or a local crime. But when the FBI does, it's espionage. Selling secrets to enemy Countries, or treason. Just don't likem.

J-Fed is NOT a certified peace officer within the State of Illinois. He is a civilian and should not wear the uniform.

You have been gone for a bit there Crimefile. The rank and file of the Dept are welcoming "J-Fed" with open arms. The moves he has made up to this point have been recieved many applause by the guys wearing blue.

I know, I know, he is a fed and what an see what he does. But until he does something that a majority of the beat cops do not like, he is still making the right moves. He is still righting a sinking ship.

I could careless if the man wears a dress. As long as he continues to make good decisions in the eyes of the working police, he is alright in our books.

As for wearing the uniform. Look at all the asses who have and that gold on their uniforms. Half of them have been promoted through clout and have not "worked the streets" or "dealt with a domestic"

Do you think someone like Ron Hubberman or Maher deerves to wear the uniform?

Wow, I've been edited out!! First time that happened. I don't know if I should feel honored or insulted.

Lets just say that J-Fed is 100% beter than Cline could ever be. J-Fed is actually gaining the respect of the boys in blue. He is ridding the CPD of all of the Cline meritocracy,oligarchy,clout,nepotism and corruption.