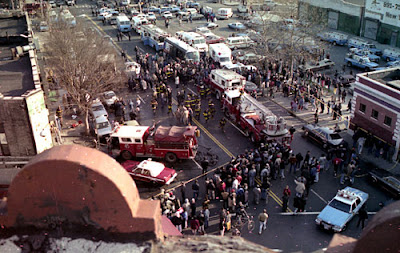 I don’t understand the fascination that mass killers have with guns. They are not suitable for mass killings by a single gunman. Something always goes wrong before the killers can expend all of their ammunition. Then there is the difficulty of paying for, stealing or otherwise obtaining those guns. Guns are so expensive, over-regulated and really ineffective. Guns require way too much training and skill to use effectively. There are far better ways as exemplified by the New York love story of sorts of Julio and Lydia.

One day, Julio Gonzalez, a Cuban Army deserter and ex-convict was very angry. He lost his job and his girl friend ,Lydia Feliciano, a worker at a local social club and Julio wanted to get even. Julio simply purchased a single gallon of plain old and unregulated gasoline.

Julio soon took his rage out on the occupants of New York’s Happyland Social Club. Before it was over 87 innocent people were dead.

School shootings are so minor in comparison to the mass murder of the Happyland patrons.

Gasoline purchases require no forms to fill out, no tiresome background investigations, and no waiting periods! They don’t care about your mental health history or your violent felony record. Gasoline is a deadly explosive that kills much better than firearms.