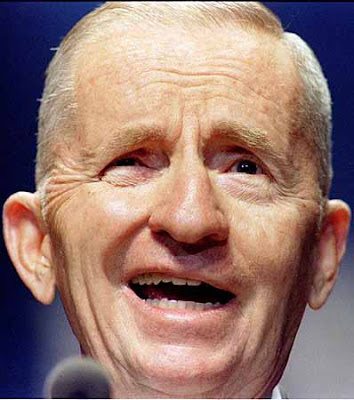 They can be so much fun! Who could forget that little weasel, H. Ross Perot’s third party efforts in 1992 and again in 1996. The Republicans ran George H. W. “No New Taxes” Bush and Bob “Viagra” Dole against the Clinton Cabal. These two Republican frontrunners were way too Liberal and weak so the Perot platform that seemed only slightly more acceptable cornered enough Republican and Conservative votes to let the Clinton disaster torture us for eight years!

Somehow I expect some third party spoilers to provide what’s missing from this presidential election so far, an acceptable and qualified candidate for President. As it stands no matter who wins from the current political litter, Americans can count on getting a real lemon.
Posted by Paul Huebl Crimefile News at 2/14/2008 02:20:00 AM

Yea, but how bout a liberal spoiler
this time! Is Nader available?

A perfect third party spoiler would be the arrogant Mrs. Klinton after she loses the nomination of the DemocRATic party.

You are so right. All of the current candidates leave much to be desired. It is no longer the best candidate for the presidency that I will be voting for, but rather the "least bad" of the lot. Sad.