It’s time For All Cops To Reject Most Gun Laws 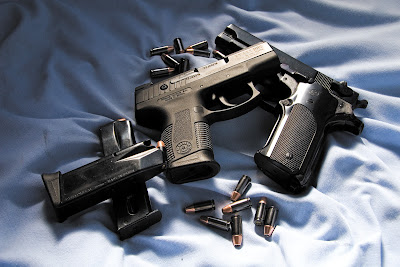 While on patrol you discover that a citizen is carrying a loaded firearm whether pistol, shotgun or rifle. You work for a jurisdiction such as in IL, NY, NJ, CA, WI, MA or some other place that bans guns. What should you do? I say follow your oath and first recognize the Second Amendment that you have sworn to uphold.

The argument that the courts should decide the Constitutionality of gun laws not street cops is just not working. Take the City of Chicago as an example. Alderman Ed Burke controls all judicial appointments and lawyers placed in judgeships. In Chicago nobody would ever be appointed or slated if he or she dismissed gun cases because of something like the Bill of Rights. As a result the Cook County judicial system is a sham. Cops have been ordered to break laws to enforce laws and that’s both wrong and un-American.

If the citizen you stopped is not involved with any offense beyond ignoring a ban or prohibition that infringes on the right to possess or carry firearms let him or her pass in peace. We must protect the rights of our citizens even if politicians write laws that violate our freedoms. Remember these rights are the freedoms of cops, their families and friends too.

I don’t suggest for a second that armed felons, drug addicts or people engaged in other criminal activity get anything less than free food and shelter in your local jail. Cops need to protect citizens and their rights.
Posted by Paul Huebl Crimefile News at 2/08/2008 05:41:00 PM

Absolutely 100% correct. Thank you for writing that.

I am a retired 40 year veteran of the CPD the Marquette Ten got jambed up because of pressure to seize guns. They started using high handed tatics and from their got into the bribery business. It was a real shame the pressure being brought by the first Mayor Daley.

We do sir. Most of us with any time on the job do.

outstanding post paul. just to make sure a gun wasnt stolen, i got to the point where i wouldnt run the gun over the air, i would type the serial numbers into the MDT terminal in the car. running guns over the police radio airwaves, only drew atention to my traffic stop.

but that leaves paper trails. so later i got to the point where i no longer ran the gun period. if they looked like a decent citizen, have a nice day.

I am a 39 year law enforcement vet and still in the business. I could not agree with your blog any more if I had written it. Keep our rights safe. THANK YOU !

It's about time someone uses their heads and posts this type of information. During a 27+ year career with the Illinois State Police, I had occasion to encounter a few hard working, decent folk who were found to be armed. Needless to say, they were few and far between but I had no qualms about wishing them a good day and going about my business. Just because the Democrats who control "Crook County" want the citizens to be vulnerable to the army of ghetto thugs in this area doesn't mean we have to help them. I'm still hoping that the Supreme Court does the right thing later this year.
Lock and load!

Carrying a weapon as a police officer is a condition of your employment.

Carrying a weapon as a citizen is a right.

I agree with you CF.Most officers I know want to feel special and really like that badge and gun thing,makes me sick.

Many of them fail to realize that their spouse and kids cannot carry a gun in IL.

Just a matter of time before some SUPER CLOUT politicians daughter is sodomized or killed.Why wait??