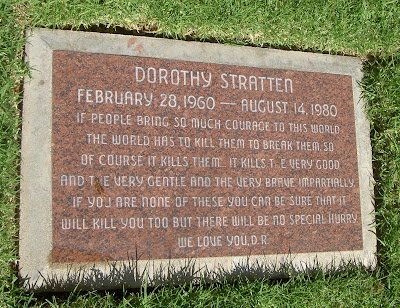 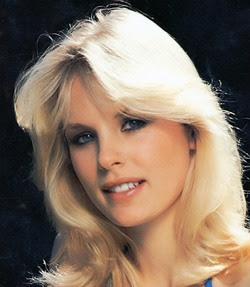 This horrible epitapath is a famous quote from Ernest Hemingway's, "A Farewell to Arms".

Canadian actress and Playboy Magazine centerfold Dorothy Stratten was merely 20 years-old when she was murdered in Los Angeles by her estranged husband, Paul Snider, 29 with a .12 gauge shotgun.

Snider was portrayed as a control freak who wanted to own Stratton. People have a tendency to exaggerate the bad or evil characteristics of those who commit despicable acts like Snider.

Stratten was about to hit the Hollywood “A” list and did not miss an opportunity to cavort with a man who could place her there, Director Peter Bogdonavich. Stratten quickly took up with Bogdonavich shacking up with him at his Bel Air castle while still married to Snider.

Snider could not cope with the loss of his wife to Bogdonavich. Snider used a divorce settlement pretext to lure Stratton to their former apartment in Los Angeles where Snider killed her then later himself. Bogdonavich went on to marry Stratten’s little sister.

For nearly three decades Stratten’s Grave pictured here has had this God awful epitaph placed in obvious anger. That nasty tombstone should be replaced with something gentle that has the kind of style and grace that Stratten should be remembered for. Stratten was victimized twice.

It's a shame she died so young. I used to date her. We sailed on my yaght many evenings. I loved her so.
Morton E. Lieberman
Former director of security for the Yiddish police society.

Her sweet sweet image will live on in us for ever

The tombstone is lovely-- just the way it is-- the seriousness of the quote- fits the circumstances...iif you know what took place, the last day of her life.....

I agree. The Hemingway quote was great. Strange that the author isn't noted. Seems like Peter wrote it: to those who don't know the source.

Dorothy Stratton is the most beautiful woman I have ever seen. She seemed to be a very sweet and trusting person. It’s a shame she didn’t tell anyone that she was meeting that psychotic POS that day. Maybe she could’ve been saved. All I know is that her murder was such a tragedy. I have yet to see another woman as beautiful as Dorothy Stratten. Personally I don’t like the quote on her headstone. It’s so gloomy.