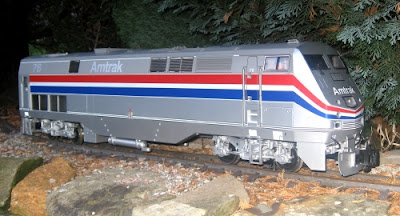 The TSA and Amtrak have taken a giant step backwards in what they are calling a new passenger safety measure. Our politicians fixed a problem that was not broken as they pile on loads of additional debt to our rail carriers. In the process they trashed American's Fourth Amendment rights against unreasonable searches.

They’re being even more unreasonable than the commercial air carriers if that’s possible. They are beginning luggage screening and passenger frisking as they bring automatic weapons and dogs to our tax supported railroad monopoly. Transportation of any firearms even un-loaded firearms locked in baggage is prohibited.

Only active police officers are allowed to transport firearms or ammunition on Amtrak trains. Retired cops or law-abiding passengers will be denied passage if they have any firearms.

Will we be safer? Just ask one dead man's family and the 100 passengers who were injured in that deliberate derailment of the Sunset Limited train in Arizona on October 9th, 1995. Someone tampered with train tracks causing the disaster. Terrorist and mass murderers need not enter our trains to kill large amount of passengers. The TSA need to put their security weenies on train track surveillance where they can deter a known problem instead of treating paying passengers like dangerous criminals.

A bit of a correction: A friend of mine (CPD) was taking AMTRAK and told me that he was not allowed to bring a gun UNLESS he was on duty.

I couldn't believe this shit, even airlines allow the transportation of locked firearms in their luggage (if declared) so I called AMTRAK police.

A smug woman told me NO GUNS may be transported on their trains, unless you are an ON-DUTY copper, and you have to prove it's official business.

I said something along the lines "who would know" which was the wrong thing. She said my ass would be locked up faster than I could think if I tried.

This is fucked up, and AMTRAK can go kiss my ass. I wouldn't ride their trains if you paid me.

We need some common sense from the Congress to get these asshats who think of this shit out of there, and have common sense regulations.