You Ring, We Rat Bail Bonds 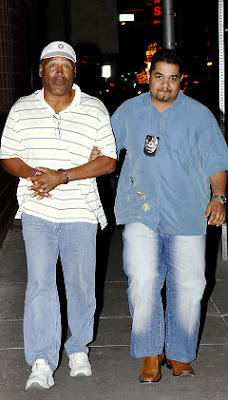 Miguel Pereira, the owner of You Ring We Spring bail bonds arranged to get O.J. Simpson released for bragging rights and to see himself on TV. Pereira also waived Simpson’s premium payment of $18,000.00. When Pereira’s publicity ran out he saw the opportunity to personally take Simpson into custody and grace TV sets worldwide with his own image.

Pereira saved Simpson’s November rambling recorded telephone message for a second wave of publicity where he could be the star. Plain and simple, Miguel Pereira is a big fat rat who sought fame at Simpson’s expense.

Did Simpson’s phone call really amount to an attempt to influence or intimidate a witness? The answer is clearly, no. Had that been the case prosecutors would have convened a grand Jury and Indicted Simpson on new charges before sundown.

Bail is our Sixth Amendment Constitutional right should we ever be accused of a crime. The purpose of bail is to insure the appearance of the suspect in court. Courts have later ruled that in addition, protection of the public is an additional consideration.

Simpson is in no way a special flight risk and has always appeared in court when required. Simpson has a right to a fair trial and now the alleged victim of the crime Simpson is accused of wants the charges dropped. Has the O.J. Simpson Circus wasted enough time of our government officials?

Update: According to a published report from correspondent extraordinaire, LINDA DEUTSCH of the associated Press, our “hero”, Miguel Pereira took a queue from Simpson’s co-defendant. It seems Pereira concealed a digital recording device on his person in an effort to record some juicy statements from the Juice during travel back to the Clark county Jail. I can only conclude that the recordings were for later sale.

I seriously doubt that lawyers, investigators or their clients would ever knowingly patronize this bonding company or Mr. Pereira’s services for any reason. Nobody likes a rat.
Posted by Paul Huebl Crimefile News at 1/16/2008 10:16:00 AM