In Case Anyone Didn’t know Tigers Can Kick Your Ass! 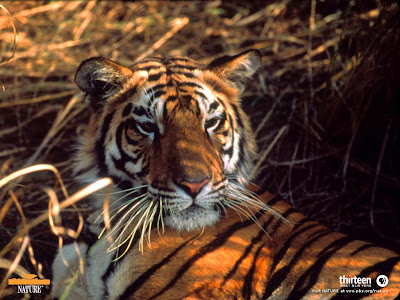 It was closing time at the San Francisco Zoo and three young fellows were at or near the tiger exhibit. The actions of the trio are subject to speculation but the results were not. An obviously agitated tiger found her way out of the enclosure and began to dine on the three visitors killing one.

No, I can’t blame the tiger for being a large carnivore and stepping out for a little snack. But there must have been a lot more than hunger involved. How many thousands of visitors could visit these magnificent creatures without such a mishap? I can’t help but believe that the lads were mean spirited and taunted the tiger causing the event. If that was the case I think that was another example of Darwin’s law and some truly poetic justice.
Posted by Paul Huebl Crimefile News at 1/16/2008 02:48:00 PM