What’s The Real Reason Behind Sara Caplan’s refusal To Testify? 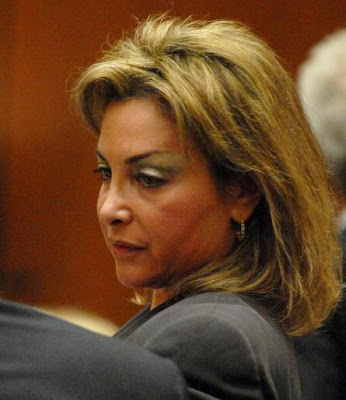 Caplan freely testified against Phil Spector in earlier motion hearings. To call that irregular is an understatement since Caplan was in fact, a Spector defense team lawyer violating her attorney client relationship with Spector.

Now Caplan won’t testify before the jury about those very same facts and has now been found in contempt of court. What’s the big deal now you ask? The cat’s out of the bag as Caplan accused premier forensics expert Dr. Henry Lee of tampering with phantom evidence. That information and accusation was revealed during cross-examination by a Spector defense lawyer at the motion hearing.

The reason Caplan is a former lawyer is simple to explain since she was part of the Robert Shapiro team fired and sued by Phil Spector. Shapiro kept a million dollar retainer paid by Spector he did not earn.

The prosecutions's phantom evidence is the “Missing Link” that would connect Spector to the death of Lana Clarkson. If this item, suggested, to be a broken fingernail really existed and wishfully contained “bullet wipe” the prosecution contends that it would somehow show Clarkson’s death was no suicide. The key word here is, if. This is nothing more than a prosecutor’s red herring injected into a case where there is no physical evidence to support criminal charges against record producer, Phil Spector.

A serious fact not to be overlooked is that the cops and their CSI teams already examined, photographed, collected all their evidence and turned over the death scene to Mr. Spector and his lawyers. This alone should clear up the issue of whether or not the fingernail exists.

Dr. Lee has vehemently denied the existence of the supposed fingernail or collecting anything similar. Dr. Lee is expected to testify for the Spector defense and we’ve not heard the last of allegations of misconduct directed at both sides of this case.

Now comes yet another character to shed light on this inquiry, Zvonko “Bill” Pavelic. Bill Pavelic is a now retired, career LAPD cop who has a lot to say about prosecutorial misconduct in the Phil Spector case. Pavelic was retained to work with the Shapiro team who now calls Sara Caplan a liar, perjurer and someone who is trying to destroy Dr. Lee’s reputation.

Pavelic has in his possession photographs of retired Los Angeles Sheriff’s detective, Stanley White with Sara Caplan in the foyer area of Spector’s home (the death scene) taken on February 4, 2007. Sara Caplan testified that White was not present in the foyer area. These photos have been turned over to Spector’s current defense team, Cutler, Rosen, & et al.

Bill Pavelic has outlined his information on his website: http://www.billpavelic.com/current/sara-caplan/

Had Sara Caplan testified as ordered she knew full well that her lack of candor would be exposed perhaps ending her career as a lawyer. Perjury charges may yet surface against Caplan.

I’m still waiting for any evidence to show that Phil Spector killed anyone. The Spector trial is turning into a huge fiasco where I have predicted all along that Spector will be cleared. I can’t help but remind folks that just like Mark Furhman in the O.J. Simpson case the crimes of the accusers will be exposed.
Posted by Paul Huebl Crimefile News at 6/20/2007 11:41:00 AM

Furman got convicted of perjury because he either lied about or forgot about talking to that female journo about using the "n" word.

Had he not lied about/forgotten about saying the "n" word, that trial would've turned out way differently.

Well, at least if Darden and Clark hadn't been the prosecutors...

"I found the contents very, very interesting as it relates to possible scenarios relative to O.J. Simpson (and) . . . the ongoing prosecution of O.J.," he said.
TV coverage
ABC, CBS, CNN and NBC plan live coverage of O.J. Simpson's arraignment on murder charges today in Los Angeles. The court session also can be seen on Court TV. It is scheduled to begin at 10:30 a.m. PDT.
Read More on or visit http://www.officialpavelic.com/