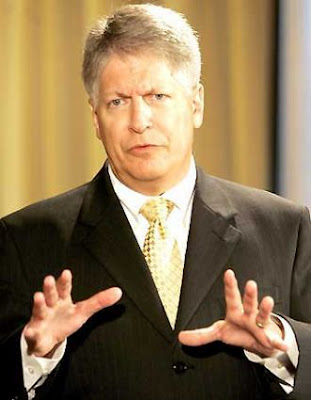 I called for strong action against this poor excuse for a lawyer who played a dangerous race card to win re-election as the top prosecutor in Durham, NC. Nifong is on trial for his law license before the NC State Bar.

Aside from any attorney rules he violated, Nifong took an oath to uphold the Constitutions of both the United States and North Carolina and violated them. Instead of prosecuting the guilty and seeking justice he set out on a path to bankrupt three families and destroy the lives of three innocent men.

Nifong knew what he was doing was wrong and did it anyway. Nifong deserves more than disbarment, a lot more.

Nifong reminds me of another rogue prosecutor who was deservedly disbarred by the name of Kenneth Jack Peasley.
Posted by Paul Huebl Crimefile News at 6/15/2007 12:37:00 PM

Paul if they send him to prison, I'll commit to mailing him a case of soap on the rope for his first 6 months.

This is the problem with the American justice system today, it is dominated by political hacks trying to climb up the ladder at the expense of truth.

Mike Mette's case is prima facia evidence of this trend.