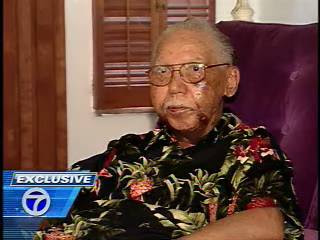 91 year-old war veteran, Leonard Sims has seen a lot during his life. The fact that Sims survived a six-year world war, lived in high crime, Detroit and survived this attack by a savage carjacker is amazing.


Detroit police quickly got the video and photos out to the media and nabbed their suspect in short order. According to police, a young ex-convict and world-class coward, Deonte Edward Bradley, 22, targeted Sims for a carjacking. 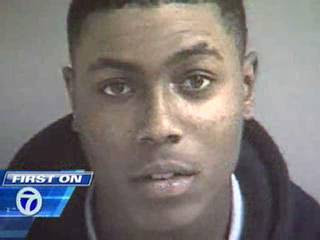 The Face Of A World Class Coward

The disturbing video is really hard to watch as the elderly man is beaten senseless while onlookers simply observed this despicable act.

Anyone who could have stopped this carjacker by gutting him with a knife or shooting him in the head would have been a national hero. Heroes are few and far between these days.

Update: The major media organizations quickly swept this story under the rug, and it’s easy to figure out why. Political correctness and Liberal failure are hallmarked by this brutal and disgusting crime.

If Deonte Edward Bradley were White, this would have brought the race card crowd, Jessie Jackson and Al Sharpton crawling out from under their rocks screaming and condemning the act along with the criminal. The problem is this is a Black on Black crime that is all too common in America. Violent Black criminals have always been a more significant threat to other Blacks than even the Ku Klux Klan.

Compare if you will the treatment by the media of three young White men accused by a disturbed, Black whore. They vilified these young men accusing them of rape and kidnapping despite there being strong evidence that the woman made phony allegations.

Deonte Edward Bradley is exactly what’s wrong with America along with those bystanders that chose to be with this vicious criminal rather than stopping him. The bystanders should be publicly identified for their obvious indifference that facilitated this incredibly horrid crime.
Posted by Paul Huebl Crimefile News at 5/12/2007 08:50:00 AM

Where is Al Sharpton protesting the cowardly and horrendous act by this savage??? Where is all the mainstream media coverage?

What a piece of human garbage! Hat's off to Mr. Simms, that has to be the toughest 91 year old I have ever seen! This jag*** punched this guy over 21 times, a senior citizen, how come no national media coverage? Oh yeah, the offender wasn't a cop. Abbate only CONNECTED about 3-4 times and you can still see the video everyday on the news. Where is the outrage from the African American community? Doesn't a senior citizen war veteran deserve that respect? Apparantly not since it was black on black. What do you think Jesse, Al? Where are you guys?

racists fat al sharptoungue, jesse jackson and the NAACP are only interested when its a white on black issue. which is rare.

paul ur right due to the age of the victim, and the GBI he was sustaining, deadly force would be approriate.

Did anyone notice the spectators who just stood there and watched this helpless man being beaten by that animal? I'll give you a hint....they were not white.

I left Detroit for Phoenix 1973 and never looked back. This behavior in Detroit is NOTHING NEW. These carjackings have been going on for years. I know grown men who refuse to drive downtown without a shotgun on the front seat. When the auto industry leaves Detroit which it has and will continue to do so maybe Detroiters can regain this fair city back. Across the river in Windsor you don't see this behavior because for years they have had bobbies walking around with BIG sticks. WAKE UP DETROIT. TAKE YOUR CITY BACK FROM THE ZULUS!!!!

I'm almost certain that the victim in this case would not appreciate you using his suffering as an excuse to denigrate his race. What the hell does race have to do with this crime? The perpetrator was a piece of scum, period--but this type of behavior wasn't invented by African Americans. You might recall that there was this little travesty against human nature called slavery a few years back, and whites did far worse to blacks throughout our country's history. I'm not black, but I'm sensible enough to recognize that violence and antisocial behavior is a disease that affects all races and creeds. Shame on you for arguing otherwise.

Detroit has been in a state of decay for decades. That is why the citizens could re-elect a corrupt, ineffective and why a 22 year old "man" in designer glasses could abuse a senior citizen in the presence of witnesses. Many of the people of Detroit are desensitized to violence and consider it normal behavior. One can only assume that the witnesses are just as likely to take someone elses property by force and the weaker the victim the better. Until the state of the environment is addressed people shouldn't expect much from people who live in such deplorable conditions.

Despicable act, despicable criminal, and cowardly spectators. Referencing the coincidentally no-where-to-be-found Jesse Jackson camp is worth noting, but comparing it to 3 white Duke students being prosecuted by an overzealous, politically motivated white prosecutor is not.

This is the first and only place I've seen this. The video is a complete outrage and made me want to vomit.

I'm sorry, but you cannot post the rest of what I would like to say on here...

No one realizes the extent of the lawlessness gripping our nation. Cops used to have much better control of the streets when they policed them on foot. It was the police beat. An area one or two cops would be responsible for. I wish I could see those days again. i know it'll never happen because those cops will be targets. But I can dream...