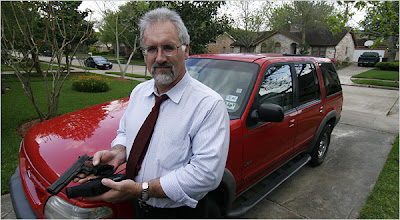 What’s the “Bubba profile” you ask? Just that, it’s some red necked, White boy with a pick up truck and a gun that is singled out for selective enforcement. In Houston the cops and prosecutors are out-of-line as they make their own law that supercedes all other law in this East Texas land.

Most cops claim to be in favor of gun rights as they earn their brownie points by arresting people for petty and even unwritten gun law violations. Government prosecutors must present all cases in court. You’d think between the cops and prosecutors some common sense and discretion might prevail. That’s just not so in the Houston area where some cops and the Harris County D.A. have placed their own warped judgment above the law.

The Federal and Texas Constitutions have mandated rights to keep and bear arms. In recent years the Texas Legislature have debated and relaxed gun laws that have either dubious value or no impact on crime or criminals.

To combat abuses the ACLU has come forward to help “Bubba” from victimization. That’s right, the same ACLU we all hate, that is, until we need them!

There’s something else very troubling in Houston where Charles A. Rosenthal Jr., the district attorney of Harris County, which includes Houston, astonishingly argues, “The presumption of innocence does not make the person innocent.” I guess they don’t need no stinkin’ Bill of Rights in Houston.