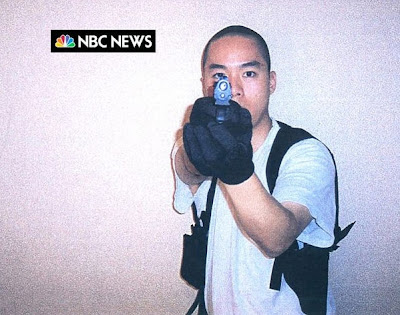 This twisted kid, Cho Seung-Hui was beyond hope or help and needed a very long rest at the laughing academy. Nearly everyone at every level failed to do the difficult and intervene for the safety of all involved.

The well-intentioned gun haters prevailed in their quest to make VT a Gun Free Zone. That effort sent a loud clear message to all of the Cho Seung-Hui clones that VT’s policy was their best possible accomplice. The school and government disarmed and tied down the victims so Cho Seung-Hui could murder them without any resistance.

Cho Seung-Hui could have killed many more if he used common gasoline or propane gas as his murder weapon instead of a gun.

Many hundreds of million dollars later the Brady background checks have not improved anything. We know that the checks prevented the sale of firearms to Americans who somehow failed or forgot to pay a parking ticket. Criminals steal guns, buy guns from other criminals, simply lie on the Brady application or use phony identification to buy guns from licensed dealers.

This event has caused both sides of the gun control debate to put their helmets on and jump in their bunkers. This time the people who were agnostic about gun control have seen the all too real mistake of putting their personal safety in the hands of government instead of using much more reliable self help.

When deciding whether to surrender your personal safety to the campus cops, unarmed mall security and undermanned local police the lesson here is a harsh one. We can’t rely on anyone but ourselves for that task. This event above all others makes self-help the only dependable choice.

Shifting the blame from nut-jobs, criminals and terrorists to the gun has not nor will ever remedy the failure of government to remove the likes of Cho Seung-Hui from society.

As Liberals wring their hands and dream up more ways to turn our entire country into a Gun Free Killing Zone, this horrifying event has already made an impression on others just like Cho Seung-Hui who will now seek their own 15 minutes of fame. We now know that the Columbine killings influenced Cho Seung-Hui to murder 32 innocent people and maim many others.
Posted by Paul Huebl Crimefile News at 4/19/2007 06:23:00 AM

Blaming the gun for this is like blaming a pencil for a spelling error. I blame the liberal hug and kiss society that allows nuts like this to walk free, because they have the right to be as nutty as they want.

It makes me angry that these media people are posting the pics and video all over the place.

Some other nutjob out here will do something similiar w/i the next few days, you wait and see.

We had the right to have guns in FL, along with the background check and waiting period. That came in really handy during the st petersburg riots in 1996. They also have the 3 strikes law, which many take very seriously. you commit a crime w/gun, the 3rd time you head straight to prison. it doesn't matter who your lawyer is...

1. Potential copycats need to see how disturbed Cho was and that he's not any type of hero.

2. Airing the tape does not give him any fame (that was done when the shooting made the news along with his name), but rather detracts from his fame by showing how demented he was.

3. People in human resources and/or security need to see the red flags exhibited so they'll know when others are about to "pull a Cho."

4. Cho's tape also gives valuable psychological insight into the minds of terrorists who also use violence for no other reason than they feel they are the "have nots" in a world of "haves."

This is the short answer from my recently published article at http://disasterprep101.blogspot.com