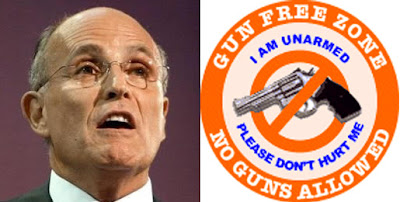 Rudy made his position clear long ago, “All gun owners should pass written test. I do not think the government should cut off the right to bear arms. My position for many years has been that just as a motorist must have a license, a gun owner should be required to have one as well. Anyone wanting to own a gun should have to pass a written exam that shows that they know how to use a gun, that they’re intelligent enough and responsible enough to handle a gun. Should both handgun and rifle owners be licensed...we’re talking about all dangerous weapons.”
(Source: Boston Globe, p. A4 Mar 21, 2000)

Motorists don’t have a Constitutional Right to drive cars like they do to keep and bear arms.

Under Giuliani’s logic nobody should be able to vote in America without passing a test and paying for a license either. Voters must be intelligent enough and responsible enough to handle electing their leaders too. Maybe we can develop tests and licensing to determine just what rights Americans can enjoy if they can first pass the tests…
Posted by Paul Huebl Crimefile News at 2/07/2007 07:25:00 AM

While I don't agree 100% with Rudy Guliani's beliefs, I think his idea about firearms has some merit. I am a retired state police officer and believe in the right to keep and bear arms. But I have also been trained to safely use firearms in both military basic training and the police academy. I realize that in order to handle a weapon safely and to know when it is appropriate to use it takes some specific training and common sense. I would have no problem with a requirement that all firearm purchasers be required to attend a firearm training and safety course, at their expense, unless they can prove that they've passed such a course thru prior military training, etc. We wouldn't allow someone to get behind the wheel of a car with driving lessons, so why should we allow the sale of firearms without first training the owners in their safe use?

If you first have to test and pay fees to enjoy a right, its not a right. All of our rights seem to have qualifiers. That means the Bill of Rights is dead.

I believe that there should be free firearms safety training for all Americans free of felony convictions. That should also include the laws of liability and justification connected to the justifiable use of deadly force.

Forced government training to keep and bear arms is un-American.

I was forced to learn when I was drafted into the Army. Of course I enjoyed that portion of my service.

We got by with no gun laws in this country for a very long time and we don't need them now!

Free firearms safety training?
Nothing is free. The taxpayers would be the ones footing the bill in that case. I'd rather not have my tax money spent on providing another free government service that won't benefit anyone except the gun owners. That is why I think that a requirement that potential gun owners go thru a mandatory, new owners firearms training class, at their expense, is reasonable. Once you pass the class, you would be issued a certificate that would be valid in 50 states and would allow you to purchase weapons with only the usual restrictions (convicted felons, etc). While I understand your position, I am uncomfortable knowing that any goof with a clean criminal record can walk into a gun store and purchase a firearm, without so much as a 10 minute course on safety and liability issues.

Requiring testing for the right to keep and bear arms is no more lawful than poll taxes and literacy tests in order to vote. A right is a right and some people want to re-write the Constitution to either eliminate the Second Amendment or turn the right to keep and bear arms into a privilege like driving a car. You can’t change the Constitution by a majority vote in some legislative body

I'm sorry anon, you can not post without first taking a test to see if your qualified. This test will prove if know how to use grammer and syntax properly as well as making sure you are not going to state anything "dangerous".

I'm sorry, I'm worried that any goof with a clean record can go around trashing my Constitution.

Rudy Guiliana is not America's saviour...Rudy is enigmatic of East coast liberalism run amuck and is nothing more than a moderate to liberal Democrat guised as a Republican for political expediency.

Don't be fooled by a party label. The GOP has not one worthy and truly conservative candidate running for the executive office. Sad but true, McCain,Guiliani and Romney are all liberal pundits in Republican garb. Both parties fail to provide solutions or to even address illegal immigration or the conflict in Iraq.

Demand an alternative or a true conservative, I am going to look at third parties this time around. I want a candidate who is Pro-Life,Pro-Family,Pro-2nd Ammendment,conservative fiscally,morally untarnished,intelligent,articulate and wordly. Is there anyone exemplifying these traits in public offoce within this country????

Remember the highest honor you can bestow upon someone is your vote. You are in essence making them "YOUR" proxy and your emmissary. Americans have become disillusioned and politically illiterate, if this trend does not change our "Great Republic" is doomed.

Yeah, he died not so long ago. his name was Reagan! I agree there is no GOP worth my vote!