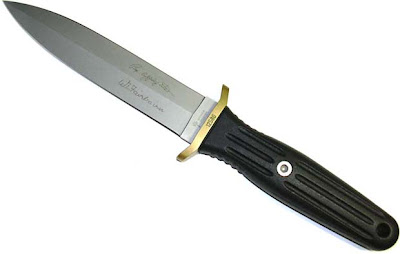 A Couple were walking out of the bar, Big Wangs on North Cahuenga last night. A group of thugs quickly approached the couple as one grabbed the buttocks of the woman. The threatening thugs got much more than they bargained for when the woman’s companion pulled out a knife and began slashing and cutting the assailants.

When it was over three of the thugs were cut, sending one to the hospital. The couple fled into the night. The couple had no duty to stay at the scene or talk to police. The police have not made an effort through the media to locate the couple. The actions of the knife-wielding boyfriend were obviously justifiable. I hope we never learn the names of the couple. I’d like to give that brave man a medal.
Posted by Paul Huebl Crimefile News at 2/17/2007 10:06:00 PM

Email ThisBlogThis!Share to TwitterShare to FacebookShare to Pinterest
Labels: Crime

Paul, why on earth would you say, that this couple need not talk to the police? The police are here to help victims. Perhaps use of the knife was excessive force and the boyfriend needs to be arrested?

Darla this couple has the absolute right not to talk to the police. That Fifth Amendment against self-incrimination is our birthright in this country. All cops take an oath of office to uphold that constitution. Most officers will respect that right.

I’m not going to worry about the use of a deadly weapon anytime there is more than one attacker. The disparity of force in shear numbers demands extreme action in order to avoid death or serious physical injury.

The tough guys made their own bloody bed. They just did not believe that someone would dare fight back.

Nobody should have to read the minds of their attackers in order to determine how dangerous they are. Using their numbers as a tool of imtimidation was their downfall.

Darla Pauls response is right. However I suspect that the police would have arrested the hero. Too many lack common sense no adays.

Not to mention the civil consequences.

When in doubt too many officers will let a jury determine the justification by arresting the victim. Civil juries tend to be loaded with liberals and pacifists who think you should just suffer through the abuse and terror.

Should you ever be in such a situation, NEVER TALK TO THE POLICE. Instead simply ask to have a lawyer present while you answer questions. The questioning will end and the officers will arrest you or not.

Your chances just improved by 100% if you shut-up rather than trying to get the officers to see it your way.

Hopefully this victim keeps his mouth shut and doesn't become a Bernard Goetz. This country's moral compass is so upside down I woud bet that the three offender's are being affectionately referred to as "VICTIMS" by today's media. Correction I meant PROPAGANDISTS...

Well done to the couple (especially the boyfriend, who most probably saved his girlfriends life)!

More people in the country need to take responsibility for their own safety.

I moved to the "left coast" after retiring with a much similar career to Paul's. I agree with those who say that the couple should have left the scene. Looking at the police activity and reponse here in Ca. OR. Wa. I find it to be lacking. The real po-lice they aren't defend yourself and screw the politically correct excuse of law enforcement.

As someone whose first car displayed a "support your local police" window decal, these comments remind me that there was a time when we were justified in assuming police could be trusted. Today we see enough to know that some can be trusted but so many others should not be trusted. Perhaps it was always that way and we were just naiave in our youth, but it sure seems like the judgment you guys possess has not been passed along to cops today.