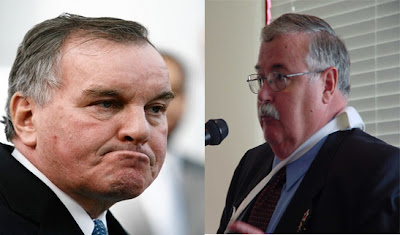 If Richie Daley and Phil Cline (Chicago’s mayor and top cop) had their way a yet to be identified South-side man and his one year-old son would be dead today. More proof that in Chicago that the inmates are running the asylum.

Yesterday, that father and his son were victims of a deadly pair of armed robbers. Brian Neal, 19 and his unknown male companion tried to rob the victims at gunpoint. They shot the young father several times before he was able to retrieve a handgun from his apartment and return fire.

This violent crime happened in 500 block of East 82nd Street in the Chatham neighborhood of Chicago where handguns have been banned.

The aftermath left one offender, Neal dead as the young father was transported to Advocate Christ Medical Center in Oak Lawn where he’s reportedly in stable condition suffering from multiple gunshot wounds. The second armed robber fled the scene.

Of course police have confiscated the only protection the victim had as evidence of both the justifiable homicide and potential ban related charges against the victim. That’s to aid in future revenge efforts by the escaped robber against the victim. Daley and Cline can be expected to go out of their way to help facilitate that revenge.

Illinois needs to give back gun rights to law-abiding citizens including the right to carry a concealed weapon for self-defense.
Posted by Paul Huebl Crimefile News at 2/16/2007 11:02:00 AM

Paul do you have any links to this event with Brian Neal? I've looked thru Chicagotribune.com to see how they may have slanted their coverage , but have been unable to find any thing yet. But it may be good that the press may not be giving this coverage. Re: the homeowner that decided to defend himself. News coverage on issues may possibly make prosecutors turn him into an example.

There was only a tiny article on this story in the Sun Times. The mainstream Chicago media is avoiding it because the implications are obvious.

Mayor Daley and Supt. Cline know this story is damaging to their gun ban program and don’t want any coverage. If I were in Chicago I would be all over this story like a cheap suit.

Of course it’s way too cold for me to venture until St. Patty’s Day. I tossed my boots, parka and mittens long ago.

Actually, they won't get anywhere with gun ban charges. Illinois has a law (inspired by Wilmette's Hale DeMar case) that when police find out about an illegal gun via self-defense, they pretty much can't punish the gun owner.

I wrote about the Hale DeMar case, and this law, here:

One of the bill's sponsors told me:

"A village can still file a charge, but the person who is charged can assert an affirmative defense and state that he violated the ordinance in defending himself...If it's believed by judge or jury, it would constitute a defense to the charge."

The legislation applies only on a person's land or in his or her "abode" or "fixed place of business."

The fascist gungrabbers within Chicago will stifle any truth in relation to the 2nd Ammendment. gov Blogoevich is attempting to initiate legislation requiring all firearms to be registered within the State of Illinois as we speak. Paul didn't California attempt this unconstitutional legislation successfully several years back? if it passes millions of informed citizens will become criminals over night by refusing to violate their 2nd Ammendment Rights How does state or municipal ordinance/law supercede the US Constitution?

Rectifying un-Constitutional legislation is the job for our courts. The problem is the politicians violating our rights also appoint the judges. The courts have failed to exercise judicial independence and have failed to protect our rights.

Paul,
I completely agree with you. They have now circumvented the legislative process by legislating from the bench. So much for the autonomous objective judiciary and constitutional separation of power.

By the way, nice job with the blog Paul...Keep it up and enjoy that nice weather for me.

I am waiting for some shrewd attorney to turn the table on Chicago. If you are in your domicile or place of business and become a victim of a violent crime Chicago is liable for denying your civil rights to ownership of a handgun and self defense.

This is entirely within the scope and would be heard in federal court. Imagine the possibilities that exist here.

I'm the first Anonymous with the question,

A google search on Brian Neals name finally brought up a Tribune article.

You have to register to pull it from the archives after 7 days.

A 19-year-old would-be robber was shot and killed by a man he was trying to rob at gunpoint Thursday afternoon on Chicago's South Side, police said.

Brian Neal, of the 0-99 block of East 56th Street, was shot about 3:30 p.m. on the 500 block of East 82nd Street in the city's Chatham neighborhood, Police News Affairs Officer Amina Greer said.

Neal and an accomplice tried to rob a 23-year-old man, who was in his apartment with his 1-year-old son, police said. A fight ensued, during which the man pulled his own weapon and exchanged fire with his attackers, she said.

Neal was shot multiple times and pronounced dead at 4:42 p.m. at Advocate Christ Medical Center in Oak Lawn, according to the Cook County medical examiner's office.

Greer said the father was shot multiple times and was in "stable" condition Thursday at Christ Medical Center. His son was not hurt. No charges had been filed against him, according to Greer.

The second robber ran from the scene, and police were searching for him as of Thursday night, Greer said.

It was unclear whether the second robber was wounded, police said.