Tales From The Twilight Zone? 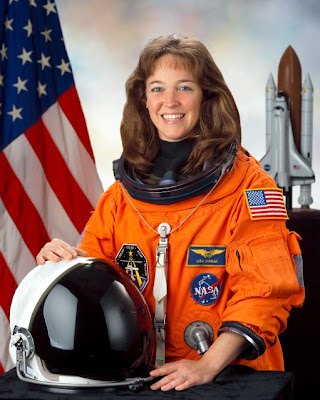 Orlando- Astronaut Lisa M. Nowak was on one more, way-out mission. This time not in space but in her overactive imagination which was overloaded with intrigue and perhaps thoughts of homicide.

Police say Nowak wore diapers for her 12-hour drive from Houston, Texas to Orlando, Florida so she would not have to stop just like she always did on her space missions. This time her program may well been to abduct and kill her rival, Air Force Captain Colleen Shipman who Nowak believed was in a relationship with Bill Oefelein, another NASA astronaut. Nowak followed Shipman to an airport parking lot and sprayed her with a defense chemical.

A steel mallet, several feet of rubber tubing and hand-written directions to Shipman's home were recovered by police from Nowak's car, which was parked at a nearby Orlando LaQuinta Inn.

Apparently the lovesick space-lady told Orlando police detectives her tale that we can count on to be developed into a major motion picture. Could it be time for yet another Twilight Zone movie?
Posted by Paul Huebl Crimefile News at 2/06/2007 10:42:00 AM

she just released a video on U-Tube.
http://www.youtube.com/watch?v=wmPCVU3u4L8