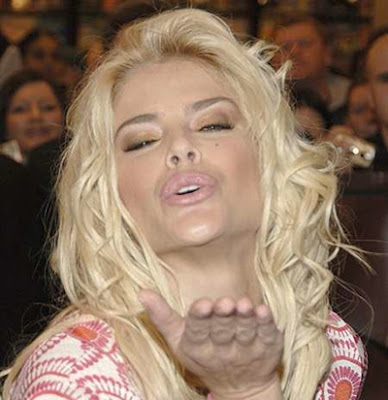 I did not want to touch this story for a lot of reasons but after more than a dozen e-mails and one comment on the blog I feel compelled to give you my take on this giant tragedy.

Anna Nicole Smith was no Marilyn Monroe by any stretch and I detest the comparisons. Marilyn was a talented actress, singer and dancer. That and she was a serious student of those entertainment arts. Anna Nicole was only a talented stripper.

Marilyn Monroe took great care of her body while Anna Nicole did not. Marilyn used lawfully prescribed drugs that the medical community later learned was dangerous. Anna Nicole was a recreational drug abuser and alcoholic. Other than being flashy blonds any similarity between these two women ends.

Anna Nicole was exploited by everyone and used the only thing she had, her occasionally fit body to exploit others. It seems like a shallow and sad life for anyone. I can’t imagine being viewed only as a prime piece of meat and only then at certain body weights.

As for the cause of death I suspected and still do that her body was damaged by horrific dieting practices, prolonged drug use and alcohol abuse. I don’t rule out improperly applied lifesaving efforts as a contributing factor. It’s now obvious that the cause of death will be settled through toxicology reports but how the drugs were delivered or ingested will be the subjects of future conspiracy books. Proving a crime will be impossible.

Anna’s baby daughter, Dannielynn is the real intrigue. I strongly suspect that Anna Nichole’s daughter was in fact at the hotel and under the sometime care of Anna Nicole's nurse rather than in the Bahamas. If the baby were found in the United States she would have been put under the jurisdiction of American courts. I suspect that Anna Nicole’s boyfriend, Howard K. Stern to avoid court ordered DNA testing, quickly removed the baby. Stern has yet to surface anywhere.

The conspiracy theories, books and documentaries will flourish for years to come as this tabloid born saga unfolds.
Posted by Paul Huebl Crimefile News at 2/09/2007 07:25:00 PM

What a train wreck.

The only thing that's sad is she left behind a child.

Who knows? It may have been an O/D or something w/her heart. Numerous plastic surgeries, massive weight gain/loss, diet pills(?), drugs, alcohol, legal battles, and who knows what else.

Paul I agree with your input. I had up close and personal physical experience with her back in 2002. I was protecting a very high profile client in Hollywood. Much higher profile than she was.

As my client and some other heavy hitters were in this one large room, I had a fixed post right outside their door. I was told to not let anyone in, unless they wore a special color and coded bracelet.

Anna came up to me and asked me to let her in. I said "I'm sorry Miss this room is only for persons with a VIP bracelet." She became furious and pointed at a large mural on that ceiling. And stated "Don't you know who I am.. that's me?" This mural was of her. Being that her mural was on the ceiling, I though perhaps someone forgot to put her on the list of VIP's. Thru my lapel Mic, I asked my clients manager inside this room if she can come in. He stated "Don't let the b....." in.

When I told her she was not considered a VIP, she raised her hand in attempt to slap me. I then had to physically restrain her and escort her away.

What's interesting is there are men out there, publicly admitting they had sex with her (yuck!) What a shame, what a waste.

You should have taken your foot and booted her out the door after all that! I hate those "do you know who i am" people!!