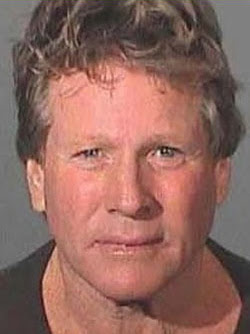 Los Angeles County Sheriff’s officers responded to a call for help from this actor’s palatial Malibu estate involving a rhubarb between Ryan O’Neal, 65 and his son Griffin O’Neal, 42. An unidentified 22 year-old, pregnant girlfriend of the younger O’Neal was somehow injured in the melee.

Let’s review this… A younger, stronger man assaults an older weaker man. The younger man has converted a fireplace poker into a deadly weapon. The elder man stops the attack with a shot that injures nobody. The elder man owns the house. So far nobody has been charged with causing injury to the pregnant female. Add to this that the younger man has a criminal record and the senior man does not.

I’m sorry, but I can’t see a valid reason to arrest Ryan O’Neal for anything at all. I always thought they sent every Los Angeles County deputy sheriff to police academies. Where did they teach those officers to arrest senior citizens for defending themselves? Perhaps they were trained in Red China or maybe Cuba rather than in the USA?

It remains to be seen how this mess shakes out. I’d like to think the O’Neal family bonds might well be stronger than whatever caused this Malibu mini-riot. In any event I’d like to think that the Los Angeles County D.A. is smarter than these Malibu gendarmes and quickly drops the case.

An update: Griffin O’Neal’s injured, pregnant girlfriend has been identified as 22 year-old Joanna Berry. Both Berry and Griffin O’Neal are represented by, The Queen Of The Bottom Feeders, lawyer Gloria Allred. Allred is asking for problems with the California State Bar since her two new clients have competing interests.

It looks like Allred is going to make a claim for injuries caused by Griffin O’Neal because they happened in Ryan O’Neal’s home. Figure that one out. Of course Allred is always looking for piece of another sleazy book deal.
Posted by Paul Huebl Crimefile News at 2/05/2007 10:30:00 AM

If that's the way it went down, the younger O'Neal assaulting his father, then why was he locked up?

Answer: Because the communists that live in the Left Coast hate anyone that uses a firearm.

Hopefully this will all come out at trial, but in the meantime, more bullshit to follow.

I do remember what one of my first sergeants told me: "kid, there are three sides to every story, YOUR side, THEIR side, and WHAT HAPPENED!"

They try to make a bad example of anyone other than sworn officers using firearmes for self-defense.

It's too hard for the Bolsheviks to control an armed population.

That leaves little choice for for someone defending themselves but to leave the scene of a shooting in order to avoid police and certain injustice.