They strung him up now what? 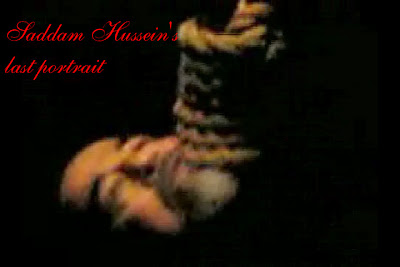 A bunch of bloodthirsty Muslims tried and now have hanged their vicious fellow Muslim, Saddam Hussein. So what was the advantage? How is anyone better off?

When Hussein was in charge people died in acts of revenge and downright wanton murder. Hussein was in the jug for the last three years and now has been tied up and hanged while bloodthirsty Muslims never stopped killing each other at the same or a greater rate.

We wanted Hussein dead because of Crimes Against Humanity. Since when have Muslims been humane to anyone, let alone each other? If that’s the reason to Hang Hussein there is not enough rope to hang all the other Muslims that deserve the same fate.

Talk about an impossible mission, pacifying Muslims is truly unattainable. Why are we trying to deal with this wild bunch of cutthroats? They are only doing what’s natural for them.

I don’t support the Bolshevik politicians that hate George Bush but I don’t want one more American kid killed or maimed in Iraq. I say bring them home so the natural population control there can resume. The fewer Muslims on this earth make things safer for everyone else.

I only have one question. Had we not invaded Iraq would Iraq have gotten into another war with Iran and caused elimination of many more violent Muslims? I think that would have been a much better solution to have several million fewer Muslims.
Posted by Paul Huebl Crimefile News at 1/02/2007 10:17:00 PM

The cookie-pushing lace pants in the US State Dept and spineless political hacks in the CIA dont have the testicular fortitude to do the right thing in dealing with these nutjobs...My question is this: why did US military forces turn over Saddam Hussein to the Al-Sadr terrorist group??Are these the same terrorists that have been killing our soldiers for 3 years now?These goofs will only view this as a sign of weakness on our part and will be emboldened by it,and increase their attacks on our troops.

Looks like a bit of prejudice there Paul. You advocate several milion fewer Muslims. That's a bit extreme don't you think?

Prejudice you say? With my tongue in cheek I say, “Not at all! Just let those rabid Muslim bastards do to each other what comes natural.”

Crimefile: I often find myself agreeing with you despite my more left-leaning inclinations. I agree that we have no business dumping American lives and money in that corner of the world, and that the lynching of Saddam will do nothing to fix the mess we've found ourselves in over there. But I have to take issue with this post. First of all, you characterize Muslims as bloodthirsty and I don't think that's accurate or fair. SOME Muslims use their faith as an outlet for grievances that are really political, social, or economic. MOST Muslims would rather live in peace and be left alone. Unfortunately, the US shares a large part of the blame for the instability in that part of the world.

Second, Islamic fundamentalism does not have a monopoly on religious violence. How about Eric Rudolph and the other abortion clinic bombers? What about that lunatic pastor from Kansas Fred Phelps, who welcomes the death of US soldiers and victims of terrorism as God's punishment for not persecuting homosexuals enough? What about General William Boykin, who has gone on record framing the war on terror as a final confrontation with the Infidel? Even without religious motives, we Americans can be pretty bloodthirsty ourselves, as our crime rates, support for capital punishment, and love of violent entertainment suggests.

Thirdly, not all Muslims share the same ethnicity or culture. To say that Iraqis and Iranians are the same just because they are Muslim overlooks the fact that they have entirely different histories. Iranians, aka Persians, are Indo-Europeans, and are descended from the same people that most white Americans are. Comparing an Arab Iraqi to a Persian or a Turk would be less accurate than comparing a Spaniard to a Finn just because they are both Christian.

Finally, it seems a little strange to endorse the wholesale slaughter of Muslims (no matter who does the slaughtering) as a means of reducing bloodshed.

You (yes, "you" because it's your goverment, freely elected, and you live in a democracy) hanged Saddam and ask "now what?"... well, according to USAmerica tradition I'd say you have at least two more guys to hang see this article in www.globalresearch.ca