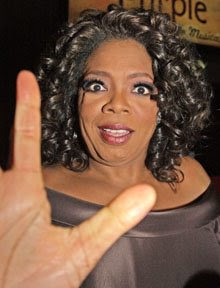 Oprah has the right to do what she pleases with her considerable wealth created here in America. Oprah’s choice to donate a King’s ransom is half a world as children suffer just a few miles away from her Harpo Studios in Chicago is mind-boggling.

Too many of Chicago’s African-American kids are being raised by drug abusing, shiftless trashy parents who would steal anything and everything donated to their kids. How about a fully staffed 24-7 safe house where children could go to eat free meals, sleep, shower, get clean clothes, play, watch TV, use computers and study in a safe environment where adults are not allowed other than staff members.

I don’t want to suggest South Africa’s poorest children don’t deserve a break but what about the kids in Oprah’s back yard? Since Oprah made her money here taking it to South Africa is un-American to say the least.

Perhaps protecting some of our own kids could translate into success stories where our own disadvantaged children could escape the cycle of bad influence, drugs, and violence. I can’t help but believe that many children may just grow up with a chance to break the welfare dependant mold of their parents.
Posted by Paul Huebl Crimefile News at 1/02/2007 02:19:00 PM

Watch it Paul! All those Oprah zombies that are after your ass now!

Why ncouldn't she do something for the kids in Englewood?

Oprah's just lazy. She doesn't want to come up with a real solution to effectively give the local children aid because she doesn't think they would appreciate it. I'm sure some if not many would but I guess international headlines are more agreeable than national...

The Link cards are a great idea. Stick her photo on it and it would be like a VUSA/Mastercard

I have been reading your blog and I enjoy it.

As to your Oprah comments perhaps the reason you described is exactly the reason why she isn't donating money to kids in her own backyard. Of course this is not to say that parents in South Africa are any better.

If we are lucky she will move there!