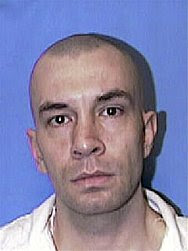 Huntsville, TX--Yes, I hate the death penalty even for convicted cop killers. My biggest fear of an innocent man being put to death does not apply here. Tonight Jonathan Moore, 32 was strapped down to the table and put down like a bad dog. Before he died he looked his victim’s widow, Jennifer Morgan in the eye and said, "It was done out of fear, stupidity and immaturity. It wasn't until I got locked up and saw the newspaper; I saw his face and smile and I realized I had killed a good man."

Moore went to his death with both grace and dignity after he repeatedly apologized for killing a young San Antonio police officer, Fabian Dominguez, 29 who interrupted a burglary in 1995. Moore was only 22 years old when he put in motion an ugly 12-year ride to Hell for himself.

More acknowledged that he was a disappointment for his family and friends. Not even this execution will reverse the severe damage and grief caused by an insane criminal act. For some strange reason I find comfort that Moore has been freed from his demons. If there is redemption perhaps Moore has been forgiven.

As for capital punishment it may be kinder to the killers than a lifetime in a cage with other convicts. This adds up to two young lives wasted as now two families suffer.
Posted by Paul Huebl Crimefile News at 1/17/2007 07:39:00 PM

I just have to ask. Are you against the death penalty?

Some people do deserve to die. I support all American’s right to use deadly force to prevent death or serious injury from a criminal assault. I oppose the death penalty for two simple reasons.

1. Mistakes and wrongful convictions do happen.
2. No government should have the power to kill its own people because sooner or later they always abuse their authority in that regard.

Taking helpless people to a place of execution, strapping them down and killing them is a cowardly act for any person or government to commit. Executing someone for crimes committed decades earlier is nothing short of bizarre especially if that person has behaved well in prison

The death penalty serves no purpose, except maybe to bring some sort of consolation to the victim's family. I will not begrudge them that as it is a difficult position to live.

I am not so worried as an innocent person being executed as opposition to capital punishment in any case.

Please don't tell me "an eye for an eye, a...." Those who call themselves Christians need only look to Jesus for guidance. The second to last thing He said before he died was "forgive them Father for they know not what they do."

While I agree that mistakes can be made, I also disagree that the death penalty should not be used. The death penalty should, in my opinion, ONLY be used when there is absolutely no doubt as to the guilt of the offender. This means DNA evidence, videotape of the crime with a positive ID on the offender, etc.
It gives the family some additional closure and ensures that no one else will ever have to worry about being victimized by this person ever again. Even with a life sentence, the courts can intervene because of an appeal and somehow find some technicality that could eventually lead to release.
Seems that the whole criminal justice system needs an overhaul. Too many innocents convicted for crimes they didn't commit, and too many guilty set free because of some technicality.

I feel that certain crimes are so heinous that society has a right to ask for a guarantee that the criminal convicted of that crime will never again commit another crime of a similar nature against anyone.

Only the death penalty provides that guarantee. You can build all the safeguards in the process you want; i.e. DNA, multiple appeals, whatever.

But I believe the community or the society in which we live has the right to seek these guarantees due to the threat certain individuals pose against everyone in society simply by drawing a continuous breath and their natural inclination of serious harm toward others.

I said this before. The most immediate and serious problems I have with the death penalty would be resolved simply by raising the standard of proof from, beyond a reasonable doubt to proof beyond any doubt.

We put people on Death Row based on snitch testimony and dubious circumstantial evidence. As for DNA evidence, it too can have legs via contamination or actual planting of evidence.

Dispite all the people taking advantage of a few minutes glory by bringing up Jonathan Moores death, there are those who knew him and thought of him as a brother. Jonboy was like a brother to me before this happened. Jon was no killer, and I choose to remember him as he was before all this occured. I have watched the media manipulate and change facts to skiew the public's perspective (particularly during the so called fair and unbiased trial). None of the readers of this can truly imagine the agony that this has caused to so many, including the freinds and families of both officer Fabian Dale Dominguez's family. But do not forget the pain and grief of Moore's friends and family.
Now that being said...
here is the hard part to deal with.

I believe my friend deserved to die by the states hand.

Until you can say this, you do not truly appreciate what it means to be for or against the death penalty.

Jon will always be remembered as friend and brother....
Safe travels my friend.....

"Safe travels my friend" into hell.