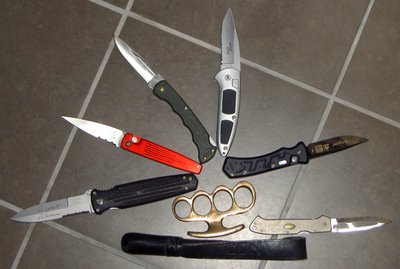 I have to laugh about better times in our country’s schools. Schools were never really a safe haven. There were always bullies and various threats that are really a part of life. In many American schools carrying a little insurance against a superior force was normal behavior. The gangs were always here. They’ve existed since the beginning of time. Until recent times We did not have a system to spread bad news quickly to every American.

That soon changed with radio and the television that followed. Americans learned the gory details about murders and soon copycat criminals emulated the media created celebrities who got caught harming others. Today there is no escape from instant media notification about every school kid with a bloody nose.

When I was a first grader I remember the corner candy store by my school. Prominently displayed on the counter was a cardboard sales rack with those gleaming, Italian stiletto knives. You know the push button variety where the blade flicked open with the help of a spring. These knives were no more dangerous or deadly, but they were impressive to watch as they flew open. School kids had them and they were no big deal.

Then came the 1960s and that damned Broadway play, West Side Story was turned into a movie seen by everyone. Young singers, dancers and actors formed the Jets and the Sharks on stage to choreographed gang fights and tragic death of the romantic characters.

West Side Story creators, Robbins, Sondheim and Bernstein brought that wonderful and poignant entertainment project to America sending legislative imaginations over the edge. I’ve seen and enjoyed the film version and a few plays over a period of time I don’t want to admit.

Within two years of West Side Story laws banning switchblade knives were passed in 47 of 48 states along with a federal ban on their importation. West Side Story brought mass Hysteria to America’s politicians and many parents.

Did the bans on these weapons in our high schools accomplish anything at all? The rate of stabbings and such simply went up ever since. Parents and politicians were satisfied with the false sense of security these laws brought. The kids with evil intentions still had whatever weapons they wanted.
Posted by Paul Huebl Crimefile News at 10/13/2006 02:18:00 PM