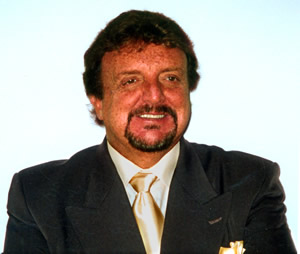 Chicago area private eye, Ernie Rizzo was a unique character. He began his career as a Franklin Park, Illinois cop. One day they fired him but he sued the village and won reinstatement with back pay. The department hated that and rather then let him work they assigned and paid him to stay at his home and actually checked to make sure he was there. That went on for a while until he opened his detective agency.

Rizzo hung around another Chicago area PI, Tony Pellicano who is now awaiting trial for wiretapping and racketeering allegations after doing time for possession of a hand grenade and C-4 explosives in L.A. Rizzo and Pellicano pretended to be rivals at times when they were really collaborators.

Rizzo is no stranger to wiretapping and took a fall for it a while back. Rizzo’s license was revoked but that did not even slow him down. Rizzo’s wife ran the agency and hired Rizzo as a consultant. The Illinois Department of Registration and Education soon learned that they had no control over that move. I don’t have a clue how it happened but eventually Rizzo was again licensed as a PI.

Rizzo was effective at getting information but he consistently grandstanded at the expense of his publicity shy clients. Rizzo never met a TV camera he didn’t like. I guess it was good for business.

I was told long ago that the reason that Michael Jackson was able to Moon Walk away from child-molesting charges more than a decade ago was because Rizzo worked one side of the case and Pellicano worked the other. These two had arranged that 21 million dollar settlement that kept the victim away from the witness stand. They brokered the deal for the lawyers involved. Nobody ever looked back, but Rizzo and Pellicano both got a bundle for that case.

With Rizzo dead and Pellicano in a federal lock-up the field is open for replacements for these sleuths. I just can’t imagine another pair of PI’s replacing these two guys. The exploits of these two private dicks could start a feature film franchise that would rival The James Bond films.

I'm sorry to hear that Ernie is gone. We went to Kelly high school
together...and "colorful" is an apt description. He'll be missed by some and maligned by others.
Just rmember, there was only one Ernie!
Hasta la vista,
Ken

Twenty years ago I was a friend to Ernie and Bobby. Twenty years has gone by and I see Ernie STILL loved the camera. He'll be missed. Love always Ernie, Mary

I worked with Rizzo a few times and he was a Sleazball.He set up one of his clients in a plot to have her husband done.Thats how he got his license back.
A technical wizard,HAAAAAAA hes lucky he knew how to turn on the lights.Helen Brach what a bunch of Bull Sheeet.
Stop deleteing the Truth!!!!!!!!!1

You are remembered.--Dr. Cody Sweet