Oprah Zombies—Who Are These Women? 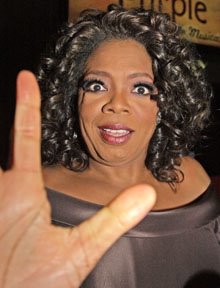 The house that Oprah built came at a time of social change in America. Affirmative action and political correctness were coming into vogue. The limited programming of early 1970s television created a captive but massive audience that had very little to choose from on their television dials.

Somewhere around 1972, I met a pudgy young Oprah Winfrey who was standing with a cute girl I was trying to pick up in the lobby area of Marina City Apartments, where I used to live in Chicago. They were both going to a Women In Broadcasting meeting for wannabe broadcasters. Looking at her I would never have envisioned Oprah’s success in a million years.

Oprah had some kind of incredible business sense that enabled her to own her TV projects where her talk show peers merely punched a clock as workers. Who could guess what massive empire would result. Oprah really learned how to use her race as a weapon.

I’ve never figured out how such a lame talk show, built on political correctness could captivate the hearts and minds of millions of American women. Oprah’s fans seem to double every time Oprah started a new diet. The world’s dictators must be envious of Oprah’s hold on people. If Oprah commanded her legions to drink poisoned Kool Aid there would be millions found dead the next morning.

I’ve talked to these Oprah Zombies and tried to understand the Oprah phenomenon. If I could understand it perhaps that kind of massive wealth could come my way. I’m sorry. I just don’t get it.
Posted by Paul Huebl Crimefile News at 10/15/2006 05:57:00 AM

Jealous much? "These women" are pretty much everyday women. As you perhaps unintentionally noted in your tale of meeting Oprah (while apparently trolling a lobby for chicks), looks aren't everything. Lucky for you.

An anonymous Oprah Zombie responds! However she reveals no secrets.

I hope she doesn't drink that Kool Aid!

Jealous? Nah, just trying to get in on the gravy.

Hey Paul, have you ever seen the Oprah skit on SNL? It's GREAT!!!!!

Your question is surprising. These "Oprah Zombies" are called women. Oprah's show, for the most part deal with topics that are real issues for real women.

Maybe you don't understand because you are not a woman.

I am a black woman in broadcasting and everytime I have to go to the backwoods of America for a story, I think, "Well at least these people have seen Oprah. (someone who looks like me.)"

Hi Paul - I just found your post written 7 years ago. You knew then...and I wasn't really paying attention to her then.

It is frightening how I agree with you on so many different issues -sooner or later.

Oprah Winfrey could not get her hands on an expensive bag in a store in Zurich Switzerland because the salesperson said no to her.

ALL important and wealthy people of ALL colors have to accept “NO” sometimes (as does everyone else).

A recent example of a“NO” response is President Vladimir Vladimirovich Putin’s “NO” response to American President Barack Obama's request for Russia to hand Edward Snowden over - an extradition request.

Oprah had better get used to the idea – like everyone else- that while many may say yes to her - there will always be a few people who may say no to her – even if Oprah is very talented, famous and loaded with dough. Saying "no" to Oprah touching a bag - is not necessarily racism, and may not be racism at all. In fact there is a
huge chance that it is not!

Why don’t white people shout racism when they are not served properly, Is it because we know there is rudeness everywhere- whoever you are – we cannot blame everything –

being shot while actively engaged in a fight

ABSOLUTELY on racism every time.

perhaps the saleslady didn’t know who Oprah was and thought Oprah couldn’t afford the bag as most people would not be able – that is not racism. It might be a slight – but it is not racism since the "NO" response would happen to anyone.

Perhaps the saleslady did not like Oprah – but that is not racism necessarily either.

Many of us have had "NO" responses for whatever reason –

and if the incident was not fully investigated and there is no evidence, this is also a dishonest accusation against the Swiss Sales lady which may say something more about the insecurities of the accuser in this case Oprah Winfrey and less about the alleged racism of the accused.

See below for link

Glenn Beck,Oprah doubles down on the Emmett Till comparison TO TRAYVON MARTIN

Comment by Oprah says more about Oprah than any real comparison or anything else.