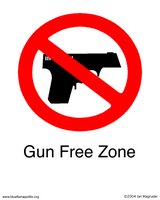 A major failed experiment of Liberals across the country was to establish GUN FREE ZONES. The concept is simple enough, to ban all firearms within certain areas.

There was no better place to start this grand idea then in our schools. Perhaps a message could be sent to the children that guns are evil and only for killing! It’s double duty, prohibiting and demonizing guns at the same time!

That GFZ concept is usually announced with bold red-letter signs. Additional efforts are taken such as placing minimum wage, poorly trained, guards with empty holsters and metal detectors at the doors of these institution.

In theory the GFZs should work. The reality is that they only work to insure a homicidal maniac can quickly gain control of the Gun Free Zone and kill as many of our children as he pleases. The Gun free Zones and unarmed security guards are no match for a determined and armed assailants or terrorists.

When the so-called Mob gave up control of the Las Vegas hotel/casinos,to new corporations, their gun-shy executives disarmed their security at first opportunity. The result was an, unprecedented surge in take over robberies and killings of tourists. The new Las Vegas executives soon learned their mistakes and re-armed their security staff members. The crime wave has all but ended.

Predictably the new term, “goin’ postal” was born. Disgruntled and disturbed employees began to settle their scores right there without interference from anyone armed. The funeral directors got an increase in business.

As corporations across the country soon adopted the empty holster, guard programs another new term was born, “workplace violence”. The same thing happening in the postal facilities happened in factories everywhere.

When the GFZ programs fail the administrators then waste good money after bad on more metal detectors and empty holster guards. The gun-hating administrators refuse to admit the failure of their experiment. They just can’t seem to learn the lesson that guns are for protecting and saving lives.

You would have though after the tragedy at the Columbine High School, Colorado school officials would have learned something. Obviously they did not.

If you are responsible for the safety of a business, school or other institution sell your metal detectors and hire trained and armed professionals and let them run the security programs. If you have an empty holster guards who can’t be trusted or trained to use a firearm, get rid of them.
Posted by Paul Huebl Crimefile News at 9/27/2006 05:47:00 PM

Are we the only ones with enough common sense to see this??

When are we going to be smart like Thailand and Israel and start training and arming our teachers in firearms use? My guess is the usual, even if it sounds optimistic: one state at a time...

When will the TRUE, and Supreme law of the land once again be upheld? The reality is that:

"The Right of the People to Keep and Bear Arms Shall NOT be Infringed".

1 : to encroach upon in a way that violates law or the rights of another.

As anyone can plainly see, there is NO Constitutionally legal way to enact 'laws' that contravene our Right. It is made crystal by use of 'SHALL NOT'. It is an impossiblity that a God-given, Inherent and Natural Right can be legally negated.

Self-Defense/Preservation is "the First Law of Nature". And our Constitution is based upon "the Transcendent Laws of Nature and of Natures God". (See Federalist #43).

This gentleman spelled it out in a very clear and unmistakable manner:

"The defence of one’s self, justly called the primary law of nature, is not, nor can it be abrogated by any regulation of municipal law. This principle of defence is not confined merely to the person; it extends to the liberty and the property of a man: it is not confined merely to his own person; it extends to the persons of all those, to whom he bears a peculiar relation -- of his wife, of his parent, of his child, of his master, of his servant: nay, it extends to the person of every one, who is in danger; perhaps, to the liberty of every one, whose liberty is unjustly and forcibly attacked. It becomes humanity as well as justice."

- James Wilson, 'Of the Natural Rights of Individuals', 1790-1792
(Signed the Declaration of Independence and the U.S. Constitution, Congressman, Delegate to the Constitutional Convention and Supreme Court Justice).

ALL laws that contavene our Right are unconstitutional, and according to the rule of TRUE law - NULL and VOID.

The government only has power to punish for MISUSE of our God-given, Inherent and Natural Right.