Being A Cop In San Francisco 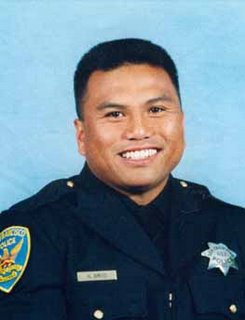 San Francisco is Ground Zero with all that’s wrong with America. Bolsheviks run the city, where homosexuals wallow in decadence, debauchery and doom. It’s a city where cops are viewed to have only one mission, enforcing hate crime laws.

San Francisco was not always that way. This once beautiful metropolis was one of the better places to live on the face of the earth. That changed over the last four decades.

The laws that regulate police were made by the rest of California’s citizens, who have different and more traditional values. The officers are sworn to uphold all of California’s laws and are not merely the Gay Gestapo.

The chief of police, Heather Fong reflects the mentality of today’s San Francisco. She’s not fond of cops either.

Last July, Officer Nick-Tomasito Birco was killed in the line of duty while engaged in a vehicle pursuit of a robbery suspect with an incredible criminal history. Of course the local population and their media trashed the officer and his efforts to keep the ungrateful people of San Francisco safe before the officer’s body was cold.

The hapless San Francisco police officers are very lucky to have found a stand up guy, Gary Delagnes, as president of the San Francisco Police Officer Association. Here he speaks out on the murder of Officer Birco. You’ll love the way Delagnes handles the San Francisco media.
Posted by Paul Huebl Crimefile News at 9/18/2006 11:49:00 AM

I'm not a police officer but a college student who is studying criminal justice, and I would like to say that when one day if I'll start working for a law enforcement agency, I would to have a representative like this man. I'm young but I do understand how liberalism is destroying our logic and ethics. The young generation is selfish and only blames the cops for their problems.

We need a guy like this in the NYPD he pulls no punches and logically and articulately argues his points and shuts down each press puke that tried to take him down. This guy will forever be my hero I hope we dont hear the last of him.

OOHRAAH! to this guy. I hope he finds a way onto nation wide television. We need him and many others to stand up and point the finger in the right direction.

You are wrong , he is NOT needed in New York, He is needed EVERYWHERE. We wish that out bosses had 1% of the backbone of this man. I want him for Australia! TJFAUST!

First off, I agree that this man is needed at all times, in every city across the nation. I have been a police officer with the LAPD for 17 years and have never heard such a down to the nitty gritty speech about what we do and what we stand for. The scumbags will have their day in judgement, but I must also say that I have many friends in the San Francisco area and the gay community its not even a blip on the radar in what they do. It is unfair, ignorant and downright uneducated to say that their time is spent protecting the liberals and homosexuals from hate crimes. I am a republican, but even I can admit that we all need democrats, liberals, etc. to keep the balance in check. Look before you leap and think before you speak It is the over embellished self of entitlement and importance that young people seem to feel today that has drained every sense of responsibility for ones own actions. You can blame the destruction of the moral fabric on the gays and the non christians all you want, but when you really look at who is responsible for these heinous acts of violence, it is the wanna be tough youth. When men and women who use their lack of motivation to get a good education and a job blame their poverty on everyone but themselves, there is no end in sight until we all grow the hell up, shut up and start supporting yourself.