Why Do We Need Alien Felons Living In America? 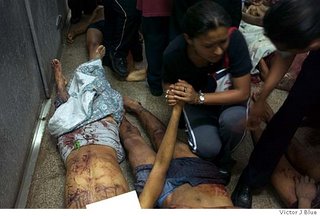 Our immigration enforcement farce defies explanation. Mexico and many South American countries have exported their crime, poverty and ignorance straight to our soil. Traitors in our own government deliberately allowed this to happen as a means to create a huge economic crisis. This attack is as damaging as any rockets or bombs.

The vast majority of Americans and legal aliens want the immigration laws on the books enforced. Our government officials refuse to do their job despite our demands.

Among the millions of illegal aliens more than ten percent are convicted felons. What possible excuse could there be to not immediately round up and deport those identified criminals? I don’t think that’s asking too much of our beleaguered politicians and the bureaucrats they appoint to enforce our laws.
Posted by Paul Huebl Crimefile News at 8/23/2006 08:28:00 AM