Why Do I Think This Sniper Monster May Be Innocent? 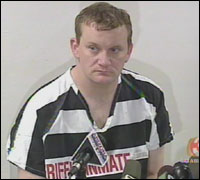 I have a huge problem accepting the theory handed out by police that 33 year-old Dale Shawn Hausner is a serial killer. Hausner does not live in the world of intrigue and paranoia and is proving to be really a sociable fellow.

Having a full time job at the Phoenix Sky Harbor Airport for nearly a decade, Hausner also was working part time as a photographer and bartender. When you add that he’s involved with a cable access TV show and cares for his own pre-school daughter where could he find the time to stalk and kill strangers?

Police ballistic evidence will be either non-existent or very weak since a shotgun was apparently used in the attacks. This case will be won or lost by a battle of surveillance videotape and data from gasoline purchases and cell phone records.

Today Hausner gave a jailhouse interview and freely answered all questions until his court appointed Public Defender, Garrett W. Simpson got there and gagged him, shutting down the chat fest. Hausner's demeanor was as straightforward as I’ve ever seen in over 30 years.

The press conference law enforcement officials gave last Friday announcing the arrest of monster snipers was very reminiscent of the Litchfield Park, Arizona, Buddhist Monk Massacre of the early 1990s. In that case too, police officials spent more time congratulating themselves for their horrible police work than offering evidence.

Four boys from Tucson were framed and put through months of pure Hell as prosecutors demanded the death penalty. In the end the Tucson boys were vindicated and freed. The boys also lightened the Maricopa County treasury by many millions of dollars.

The immediate evidence to justify the arrests will be found in search warrant affidavits and police reports. We can count on the officials hiding these documents only if their case is really lame. If they have real evidence they will shout about it from the rooftops.

I predict officials will hide everything from public view opting for a secret Grand Jury Indictment instead of a public Preliminary Hearing to make their case for probable Cause.

I’d ask County Attorney Andrew Thomas to tread carefully here and shut this down quickly when the evidence just doesn’t add up correctly.

I think you just may be right again, Paul.

It smells bad here too.