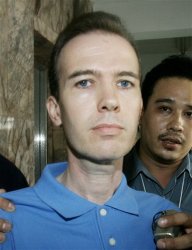 What’s this really about?

I’m convinced that John Mark Karr is a nut job and not a killer. Karr is apparently obsessed with children and their murders. I watched with amazement as Karr dryly tells the international media, “I was with Jonbenet when she died." and, "It was an accident.” That sound bite is beyond belief.

My prediction is that Karr will be behind bars for several months and never match the DNA sample or be implicated by any physical evidence.

Sexually assaulting and killing Jonbenet Ramsey would give a twisted pedophile the highest status among the other freaks of similar ilk. Is Karr bragging to claim the status to impress other pedophiles? If John Mark Karr was starving for attention he’s in store for a lot more than his 15 minutes of fame.
Posted by Paul Huebl Crimefile News at 8/17/2006 03:37:00 AM

I'd take my kid out of school if a creepy looking guy like that was the teacher. "You can't judge by appearances"? You sure can in this case, whether the JonBenet allegations pan out or not.

I don't have children and wouldn't even let this creep watch my cat.
WEIRD