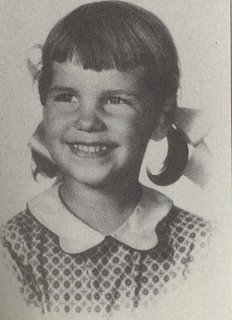 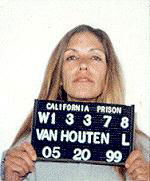 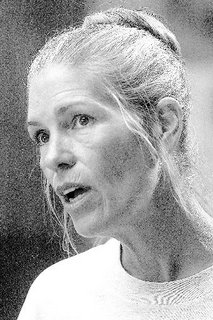 Leslie Van Houten now aged 57 was a murdering member of the Manson Family. As a teen, she left a life of wealth and privilege to join a cult of drug freaks. They were the Manson family that left a trail of horror never seen before or since in the Los Angeles area.

The incredible grip that Manson had of total mind control over his “family” has never been satisfactorily explained to me. These women would do absolutely anything Manson desired. There were heavy drugs in the mix that spawned this murdering machine.

Van Houten helped kill Leno and Rosemary LaBianca. She was a part of the cult that also killed pregnant actress Sharon Tate and four others in hopes of starting a revolution of which they would be the only survivors. Van Houten was never known or accused to be personally involved with the Tate killings.

Van Houten was once Prom Queen material that had gone terribly wrong. Originally she was sentenced to death for her despicable acts, but that was commuted to Life with parole in 1972. She’s been a model prisoner, repentant and up for parole 15 times before. Van Houten's next trip before the parole board is set for September 7, 2006 at the women's prison in Corona, California.

While in prison, aside for renouncing Manson long ago, Van Houten has earned a Bachelor's and Master's degree. She works as a clerk in a chaplain's office and has not been the subject of a disciplinary report since 1976, for possession of marijuana (inside prison).

Van Houten later went through alcohol and drug rehab, group therapy and psychotherapy in prison. She has helped lead drug and alcohol programs for other women, including a relapse prevention program for long-time members of a mutual support group which shares experience, strength, and hope. She chairs two Friday nights per month.

Can we ever forgive the mad acts of some drug-crazed kid from nearly 40 years ago? Can she ever be redeemed and reclaimed as a human being that deserves freedom again?

Van Houten won a re-trial in the courts in 1978 and was freed on bail for a six month period of time. She never ran or garnered police attention during that period.

Call me soft or whatever you want. I say let the woman out. It’s time for her to make a contribution to our world.

I found this interesting video containing prison interviews of the Manson Family by Diane Sawyer.

Sounds like she's making an adequate contribution right where she's at. Let her rot there.

The original court sentenced her to death right? Now you want her out? Sounds like Thomas Trantino. Do you know about his story. Bottom line is the jury NEVER intended for her to be free. Respect there judgment.

I would have been much happier to see the victims of the Manson family armed and trained to kill every one of their intruders. That just was not the case.

I’m look now at the tremendous passage of time and redemption for this woman. I have no illusions expecting California to parole any Manson family members, ever. Retribution and revenge are what rules today.

I am torn on this one. Can an ex offender make it and be trusted?...

A person, in my opinion, needed to be a decent person, with good support and upbringing, and a good heart and conscious BEFORE they started making bad choices and how many crinals fit that profile?...

I would really like to have them examine what her belief system is like. Go back to what Stanton Samenow calls "errors in thinking" or maladaptive thinking patterns. That is generally a pretty good indicator of what's going on in that head of hers. In my opinion, Cognitive Therapy works better and THAT is what kind of therapy she should have been getting. But, prison systems don't have a history of high end, high paying jobs that would lure some top notch people. And, all those degrees and programs are nothing but time fillers unless she uses it in the free world. Many cons earn degrees. How many are doing legit things today?....

My questions are?... What are her core beliefs? What are her maladaptive thinking patterns? Remorse...SERIOUS remorse?...Who is gonna be her support person?...She really will need a good support system for YEARS...Who would hire her to work?....Can she function in society?....I think we are talking 1969, right? The world is completely different. What if Chuck gets a hold of her or she contacts him?... The horror of what those families went through. The terror those poor victims felt as they begged for their lives. But, what is justice?...This whole deal is very risky. But, if all the questions are in her favor, swing open the gate.

We recently had a high profile....I think 1977 murder case here in Illinois. A 17yr old (Patricia Columbo)and her mid 30's boyfriend killed her parents and brother. Later in the Illinois Dept. of Corrections she was accused of running a call girl service within Dwight Correctional Center in Dwight, IL. Well, when I heard she was up for parole again, I thought "Give me a break!!!!". I hope she never sees a free bird fly past her cell let alone see the outside of prison. From what the media reported she doesn't look changed to me and she took out her whole family. She wasn't on drugs, young and manipulated. In my opinion, she is still a threat. Hell, here in Illinois they have paroled more than a few gang leaders who were sentenced under the "old code". Now, time is a flat number and you serve so much of that term. No visit to the parole board. You picked a tough, controversial topic Paul. Either way, it wil break more hearts.

As long as she is walking and talking, leave her where she is. If she was 75, mute and invalid I would support parole. Yes, it's true people can change, but how many times have you witnessed such changes in your lifetime? How many times have thought someone changed only to be disappointed or harmed because they really hadn't? Past behavior is still the best indicator of future behavior in human beings.

Let her go. She is not Manson. HE is the one you should never ever let go. She has turned her life around and proved it for well over 30 years.

Would you want her free if it was your family that was butchered?

Go ahead and cut her loose. If she busts up on parole, they can always house her again. cheaper on the CA tax payers to let her live and work the streets than to keep her in college level courses.

I dunno Paul. Based on the facts you laid out, maybe she should be given a chance (and I'm as pro-law as you can get). But maybe she ought to stay where she's at to pay for her past sins.

Either way, the Parole Board should take a hard look at this and not just dismiss it out of hand, just because previous PB's have said no.

If she can be swayed to believe Manson's bulls#$%, who is to say she won't do it again to the next Manson???

"Would you want her free if it was your family that was butchered? "

Part of being a Christian is forgivness. She has turned away from her former life. Growing old tends to do that.

Yes, if it was my family I would want her freed. Mason? No, he is still a nut case and very dangerious. But she has turned.

And BTW, I am a very very conservitive right wing guy!

This retribution thing is crazy. Van Houten has spent two to three times what other killers serve in California prisons.

At least she readied herself to return to society long ago. It's time to let her go.

For some reason I expect she will do something really good befor she dies. We need to give her that chance.

Oh boy, I was really getting into that little movie when it ended short. ide really like to see the rest some time. As for Houton let the familys of her victims comment on her release and reform.

It's time Van Houten was released. She didn't partake in the Tate murders and only played a marginal role in the Labianca murder. Although she was part of that crime, other killers have been released after spending less time in jail for much worse crimes. Locking her up for the same number of years as Manson is unfair anyway, because he is ultimately answerable.

Her original sentence was death. I think the fact that she is even still alive and kicking should be considered a gift. If her orignal sentence would have been carried out, we would not be having this conversation. She is lucky to be given a second chance at LIVING. The LEAST she can do is stay locked up. Her victims don't get parole. They are where they are forever. She should be where she is forever too.

From David (Australia) I believe that most people can be rehabilated. I served 23 yrs in prison from the age 16 (juvenile dterntion then adult facility) unilt i was 39... As a immature drug addited street kid i did commit a murder and was given what they called in those days Governors pleasure (the key) only he could free me, no sentence as such. While in an adult facility as a young man being preyed on by so-called tough guys. I commited another serious crime in protection of myself. I have been free now for almost 10 yrs.. I have been drug free and crime free since my released have mentored young men in and out of prison. I was given another chance and i am greatful for that. I live with a heavy heart everyday for what i have done in the past. I cannot change that. I believe Leslie, Susan, Patricia, Bobby and Tex, should be given a chance. I believe they have made sincere attempts to become worthwhile people. I am proud of them even though they do not know me. Proud of their achievements while incarcarated. st my opinion for what it is worth

I say no.Keep her in jail.She killed people and that was her choice.Let her rot like the rest of them.We don't want her" MJK

she needs to stay in there and thank God for her life. she could have gatten the death penalty like she gave those people. leave her in there.

i would like to see her freed from prison. she has a great prison record. she was a child when she entered the prison system. she had done wrong. but she has proved her self over the years. and she is know longer a threat. its time for the parole board to set her free. she has done enough time.