Monsters Have Been Found And Arrested In Phoenix! 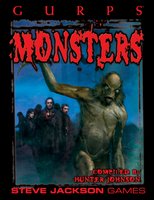 Monsters, not suspected monsters but REAL MONSTERS according to officials now stand accused of being behind the killings and wounding of numerous innocent people over the past year. I’m amazed to see these law enforcement pros risk creating huge adverse, pre-trial publicity blunders here.

These authorities claim to have now linked these monsters to the killings of six people and wounding of 17 others, mostly pedestrians and bicyclists, since May 2005 in the "Serial Shooter" case.

This morning Phoenix politicians and law enforcement held a half hour Love In where they said that two men in their custody were monsters. I say Love In since they spent no less than 25 minutes saying how wonderful they and their efforts were to apprehend the monsters. The two monsters were spotted on surveillance video connected to a area Wal Mart arson cases by BATFE agents.

The two, so-called monsters are Dale Shawn Hausner, 33 and his Pal Samuel John Dieteman, 31 are in the police confessionals (interrogation rooms) as we speak. Will they be smart enough to say, I want a lawyer? Nah, that’ll never happen.

Dale Hausner is a photographer and bartender who has his own website where he mugs with boxers Bernard Hopkins, Mike Tyson and others. Hausner has been in local Phoenix courts for a slew of traffic violations. Hausner was also convicted of shoplifting and failure to appear in court according to Peoria Arizona City Court records.

Dieteman had his share of traffic citations and was wanted on an outstanding shoplifting warrant from the Glendale City Court.

Hausner's website was shut down so here are a couple of photographs... 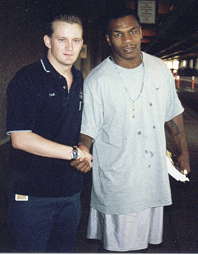 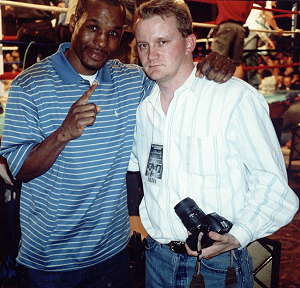 I thought it interesting that the Walmart buring episode of South Park aired on Comedy Central on June 5, 2006 and the Glendale Walmarts were torched on June 8.

I am glad they are now caught but it was perhaps not the best idea for the authorities to refer to the shooters as "Monsters" or "Animals" before they were caught because then people would not think that it could be someone that they worked with or were related to or knew.