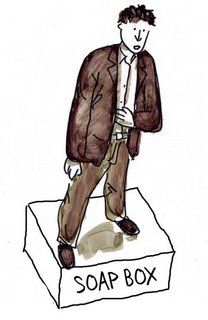 First there was the soapbox, then the printing press. Later came the radio followed by TV and the world of dialup Internet. Now with broadband there is no limit of our ability to send our message to the masses.

With Google Video, Digital Live and Youtube along with a growing list of free video hosts the computer has been the place to post or watch the blogcasts.

I began this as a blooger last December. Since then I’ve learned how to use and abuse print, photos and video all at once. Presto, I’ve become a blogcaster!

The most amazing thing about blogcasting is you can do whatever you want. Total free speech, well almost. The opposite side of this sword is that you risk offending friends, business peers and clients who will never agree with all that you put out in cyberspace.

I have instant ratings via the site counter to see what works or not. A story headline can do nothing or bring in the viewers.

Soon our television sets will all be large flat panel jobs will be primarily used only to watch sports or movies. News and most entertainment will be blogcasted and watched on laptops and desktop computers throughout the land.

What’s the bad news? I discovered putting up a really lame home video of Brittany Spears brings in a lot more viewers than a news story that affects our lives. I guess I’m in trouble when sitting in some dentist’s office, reading an issue of People Magazine and I don’t have a clue who most of the people are in all those pictures.
Posted by Paul Huebl Crimefile News at 8/12/2006 12:27:00 AM